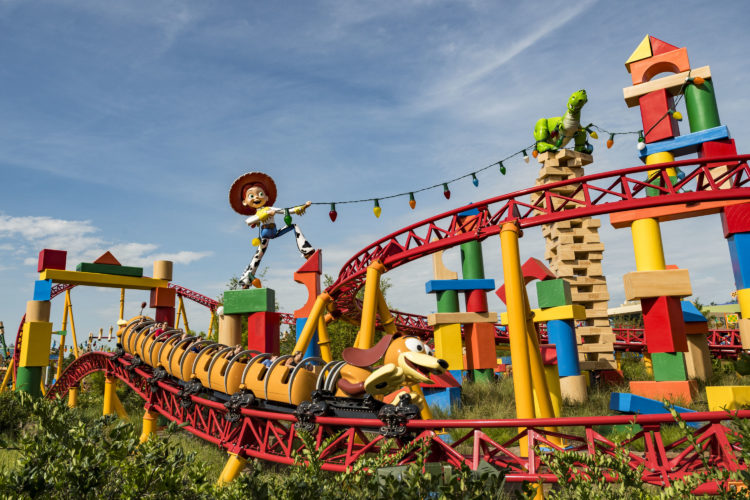 Slinky Dog’s coils twist and turn around the curves, hills, and drops of Slinky Dog Dash at Toy Story Land at Disney’s Hollywood Studios. The family-friendly coaster is inspired by the hit Pixar Animation Studios’ Toy Story films, and is Disney’s first coaster with a double-launch. Walt Disney World Resort guests get to race and dive around a track that stretches across Toy Story Land. (Matt Stroshane, photographer)

As Toy Story Land is part of the Incredible Summer at Walt Disney World Resort, Disney executives recently provided updates on other exciting projects at the resort – including news of a high-revving addition coming to Disney’s Hollywood Studios.

“Disney World is enjoying the most significant period of growth in the last two decades, thanks in large part to Toy Story Land,” said George A. Kalogridis, President of Walt Disney World Resort. He noted the new land is part of a “Disney Theme Park trifecta” with last year’s opening of Pandora – The World of Avatar at Disney’s Animal Kingdom and Star Wars: Galaxy’s Edge coming in 2019 to Disney’s Hollywood Studios. “In the run-up to 2021 and the 50th anniversary of Walt Disney World, more exciting new attractions and experiences are planned that position the resort for continued growth and galvanize Disney’s place as the leading vacation destination in the world.”

In news announced today, speeding into Disney’s Hollywood Studios early next year will be – Ka-chow! – Lightning McQueen’s Racing Academy. The all-new show experience, to be located near Rock ‘n’ Roller Coaster, will welcome guests to the world of Cars and bring them face to face with racing legend Lightning McQueen. With help from friends Mater and Cruz Ramirez, McQueen will showcase some of what he’s learned over the years with guests – the next generation of rookie racers. Of course, this is Lightning McQueen, so a few twists and turns are to be expected on the road ahead.

Incredible Summer 2018…and Beyond

From Supers to an intergalactic concert and much more, Incredible Summer highlights include:

Magic Kingdom Park is home to the Incredible Tomorrowland Expo, featuring character appearances, dancing, special activities, Incredibles-themed décor and more.
Star-Lord and Gamora are part of daily cosmic concerts at Epcot in Guardians of the Galaxy – Awesome Mix Live!, with an alien band playing timeless classics from the ’70s and ‘80s in the America Gardens Theatre.
Donald’s Dino-Bash at Disney’s Animal Kingdom is a prehistoric party in DinoLand USA hosted by Donald Duck and featuring Disney characters in dino-themed attire.
UP! A Great Bird Adventure at Disney’s Animal Kingdom invites guests to discover some of the world’s most exotic birds during an all-new show starring Russell and Dug from Disney•Pixar’s “Up.”
Disney’s Hollywood Studios in Midst of Multi-Year Transformation

Toy Story Land and Lightning McQueen’s Racing Academy are part of a multi-year transformation of Disney’s Hollywood Studios, where guests will experience their own adventures in the worlds of their cinematic imaginations and make cherished memories like never before. Upcoming attractions and experiences in and around the park include:

Late fall 2019 is liftoff for the new 14-acre land inviting guests to live their own Star Wars adventures, taking them inside stories from a galaxy far, far away. Guests will explore Black Spire Outpost, the largest settlement on the remote planet Batuu. Here they will meet characters both familiar and new and experience the sights, sounds, smells, tastes and adventures of the Outer Rim and Wild Space.

One attraction will be an epic Star Wars adventure unlike anything Disney has ever created. It will put guests in the middle of a battle between the First Order and the Resistance. Elsewhere in the land, guests will step aboard the Millennium Falcon and pilot the fastest ship in the galaxy, firing laser cannons and steering the starship through deep space.

Fans will live out their Star Wars adventures beyond the theme parks with an epic experience at a groundbreaking new Star Wars-themed hotel concept located near Disney’s Hollywood Studios. Guests will enjoy a one-of-a-kind experience where a luxury resort meets a multi-day adventure in the Star Wars galaxy, as adventures unfold around their starship. An opening date will be announced later.

Opening in 2019, the first ride-through attraction themed to Mickey Mouse and Minnie Mouse will feature a new original story and lovable theme song as it takes Disney’s Hollywood Studios guests on a journey inside the wacky and unpredictable world of Disney Channel’s Emmy Award-winning Mickey Mouse cartoon shorts. New technologies will transform the two-dimensional cartoon world into an astounding multi-dimensional experience.

In fall 2018, the new Disney Junior Dance Party premieres at Disney’s Hollywood Studios. This interactive performance will feature high-energy music, a vibrant party atmosphere, special effects and characters from popular Disney Junior TV shows. Guests join all the fun with the stars of “Mickey and the Roadster Racers,” “Doc McStuffins,” “The Lion Guard” and the newest hit series, “Vampirina.”

Wine Bar George by Orlando Master Sommelier George Miliotis is now open, offering more than 130 selections by the ounce, glass and bottle in a range of varietals, vintages and prices. And coming summer 2019 is the new NBA Experience that will offer a mix of games, competitions, hands-on immersive experiences, a retail store and more.

Disney’s Coronado Springs Resort will open a new 15-story tower in summer 2019, including 500-plus new rooms and suites, as well as concierge-level services, a rooftop restaurant and other enhancements. As part of the transformation of Disney’s Caribbean Beach Resort later this year, Old Port Royal will provide a new centralized location with more convenient access to services, amenities and dining with a tropical flare.

The proposed 15th Disney Vacation Club property will be located near Epcot with a rooftop restaurant showcasing panoramic views of nighttime spectaculars at Epcot and Disney’s Hollywood Studios. An opening date will be announced later.

Now available to everyone at Walt Disney World Resort, Minnie Van service offers a comfy, convenient and expedient way for guests to travel to and from theme parks, to dining reservations at resort hotels, to shopping sprees at Disney Springs and much more. Minnie Van service to and from Orlando International Airport is also available.

Starry-eyed guests will glide in overhead gondolas to two Disney Theme Parks from any of four Epcot-area hotels aboard this new transportation system. Disney Skyliner will offer Tinker Bell views as guests float to either Epcot or Disney’s Hollywood Studios on roundtrips from Disney’s Art of Animation Resort, Disney’s Pop Century Resort, Disney’s Caribbean Beach Resort and the proposed Disney’s Riviera Resort. An opening date for Disney Skyliner will be announced later.