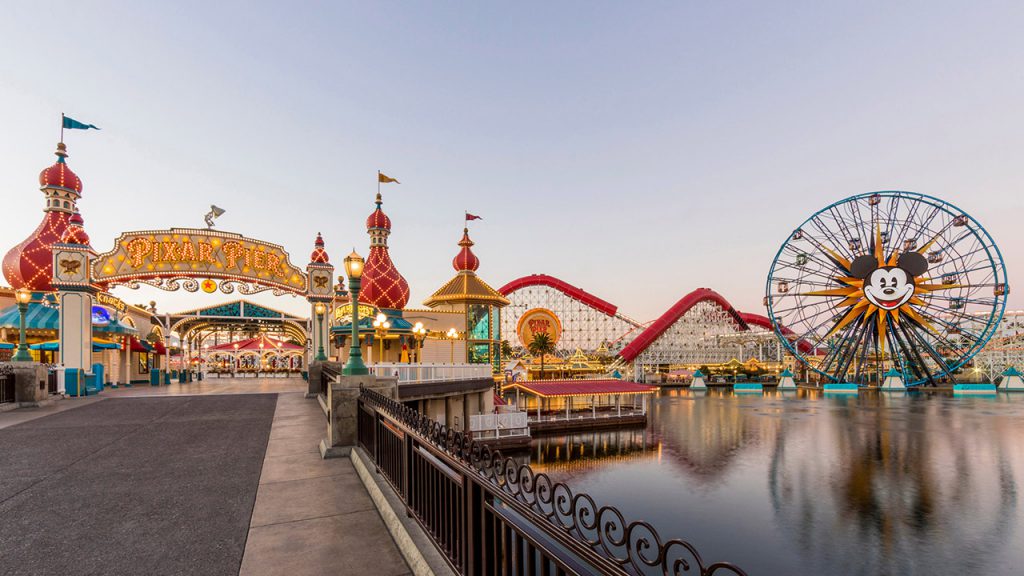 All things Pixar are celebrated in an even larger way at the Disneyland® Resort! Celebrating its first anniversary in summer 2019, Pixar Pier has recently opened Inside Out Emotional Whirlwind, a newly reimagined attraction that takes you on a “sense-ational” spin.

You can enter the wonderful worlds of Pixar through a dazzling marquee that leads to four whimsical neighborhoods at this seaside waterfront—Incredibles Park, Toy Story Boardwalk, Pixar Promenade and Inside Out Headquarters.

Let’s take a look around!

Incredibles Park – Inspired by “The Incredibles,” Incredibles Park is an inviting plaza featuring mid-century modern design aesthetics. Anchoring the neighborhood is the Incredicoaster, which will take you on a thrilling race alongside the Parr family.

Toy Story Boardwalk – This area houses the popular Toy Story Mania! attraction and its 4D carnival games. Along the boardwalk, you may meet Bo Beep, Woody’s long-lost friend from “Toy Story 4.” On Jessie’s Critter Carousel, hop aboard a sweet woodland creature inspired by the vintage television show, “Woody’s Roundup” from “Toy Story 2,” and go for a spin.

Pixar Promenade – This charming seaside promenade inspired by classic turn-of-the-century California boardwalks celebrates a collection of favorite Pixar stories. The focal point of Pixar Promenade is the Pixar Pal-A-Round, taking you up high to enjoy the beautiful sights of Pixar Pier from 24 gondolas – each one adorned with a Pixar pal. Step right up to Games of Pixar Pier, where you can test your skills and win a prize at colorful pay-for-play game booths. Bing Bong’s Sweet Stuff offers delightful confections such as saltwater taffy, rainbow cotton candy and Memory Makers.

Inside Out Headquarters – This playground for the emotions features Inside Out Emotional Whirlwind, a whimsical family-friendly attraction. You can hop aboard one of eight Memory Movers to help Riley’s emotions sort through the memories being collected.

Come explore Pixar Pier at Disneyland Resort. Adventure is out there!