Avengers Campus – In Their Own Words 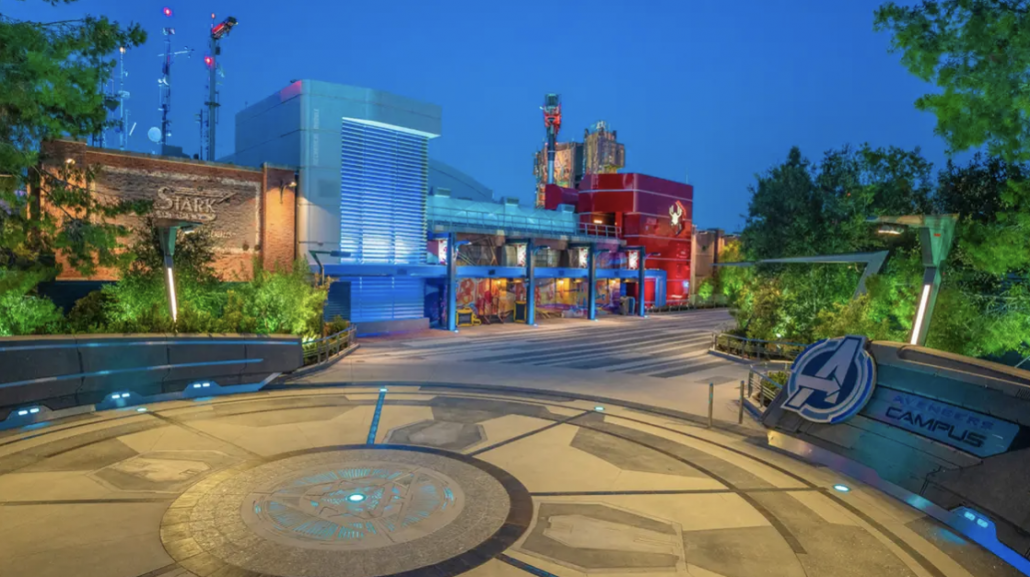 About the collaboration between Walt Disney Imagineering and Avengers franchise filmmakers

“At Walt Disney Imagineering, our goal is to always deliver on adventure, immerse guests in a story and really tap into their imaginations. One of the great opportunities with Avengers Campus was collaborating with our studio partners from the very beginning. It has been a truly dynamic collaboration. We’ve taken the famous Nick Fury line, ‘You’re a part of a bigger universe. You just didn’t know it yet’ into every attraction, heroic encounter and experience in the land. This will make every guest feel like they are a part of something even bigger as they find the Super Hero within themselves at Avengers Campus.” – Scot Drake, Portfolio Creative Executive, Walt Disney Imagineering

“I am a fan, first and foremost, so being able to work with Imagineers is pretty astounding. The talent at Walt Disney Imagineering is unbelievable. They are brilliant at finding a way to do all the things they need to do at a theme park, and still keep the story at the core of it.” – Dave Bushore, Vice President of Franchise Creative & Marketing for Marvel Studios

About the guest experience in Avengers Campus

“Avengers Campus will be a place where fans and guests can finally step into the universe they love and stand alongside some of their favorite heroes. The optimism inherent in Avengers Campus captures the diversity, power and teamwork these extraordinary characters possess, and now they come together to unite people from all over the world under one guiding principle: We are stronger together.” – Dave Bushore, Vice President of Franchise Creative & Marketing for Marvel Studios

“Now, fans of these movies and comics are getting to go to a place they’ve always dreamed of ­– and that is an incredibly powerful thing. You don’t have to pretend anymore. You actually get to be.” – Dave Bushore, Vice President of Franchise Creative & Marketing for Marvel Studios

“When we set out to create these extraordinary Super Hero experiences across the globe, we designed a new Spider-Man attraction for Disney California Adventure Park in an immersive land with amazing character experiences. We also crafted an original story that ties all the experiences together in ways that are authentic to these characters. We worked side-by-side with teams that brought the Avengers films and comics to life to create a place that champions the next generation of heroes.” – Scot Drake, Portfolio Creative Executive, Walt Disney Imagineering 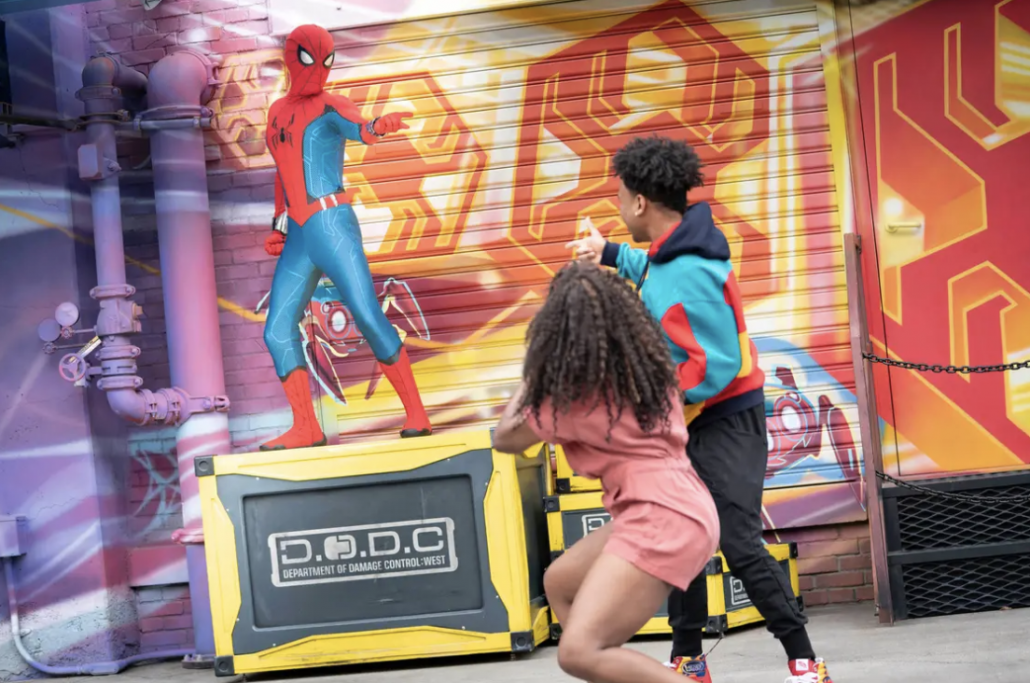 About the storytelling inside Avengers Campus

“At Avengers Campus, we are bringing three core themes – heroism, optimism and empowerment – to every activation in the land. You’ll see this in every detail, from the food items to the character encounters. Our goal has always been to extend the storytelling in unexpected ways. It’s what makes this land so rich and exciting for all guests, no matter what age or level of fandom.” – Jillian Pagan, Staff Writer, Walt Disney Imagineering

“Think about the difference between being a movie-goer and being inside a theme park. When you walk into a movie theater, it’s a very focused experience. Filmmakers tell you what to look at, and when to look at it. You can’t move around inside that environment. Now, take those films and give us the challenge of bringing those environments to life, where you can walk up to it. Touch it. Tap on it. It’s exciting to bring the film to the real world in a way no one has experienced it before. We use lighting, color, and real-world techniques to convince you that you’re in a world you’ve only ever seen on a screen before.” – Heidi Rosendahl, Principal Color and Paint Artisan, Walt Disney Imagineering

About becoming a Super Hero and slinging webs on WEB SLINGERS: A Spider-Man Adventure

“We always start with wish fulfillment when we are creating an attraction. What’s that one thing you’ve always wanted to do? What’s the power you’ve always wanted to have? WEB Slingers: A Spider-Man Adventure brings together physical sets, practical effects and virtual set extensions to bring this adventure to life.” – Brent Strong, Executive Creative Director, Walt Disney Imagineering

“You actually get to go on a real Spider-Man adventure and help save Avengers Campus from those rampaging Spider-Bots. At the end of the day, Spidey can’t do it alone.  He needs our guests to help!” – Brent Strong, Executive Creative Director, Walt Disney Imagineering 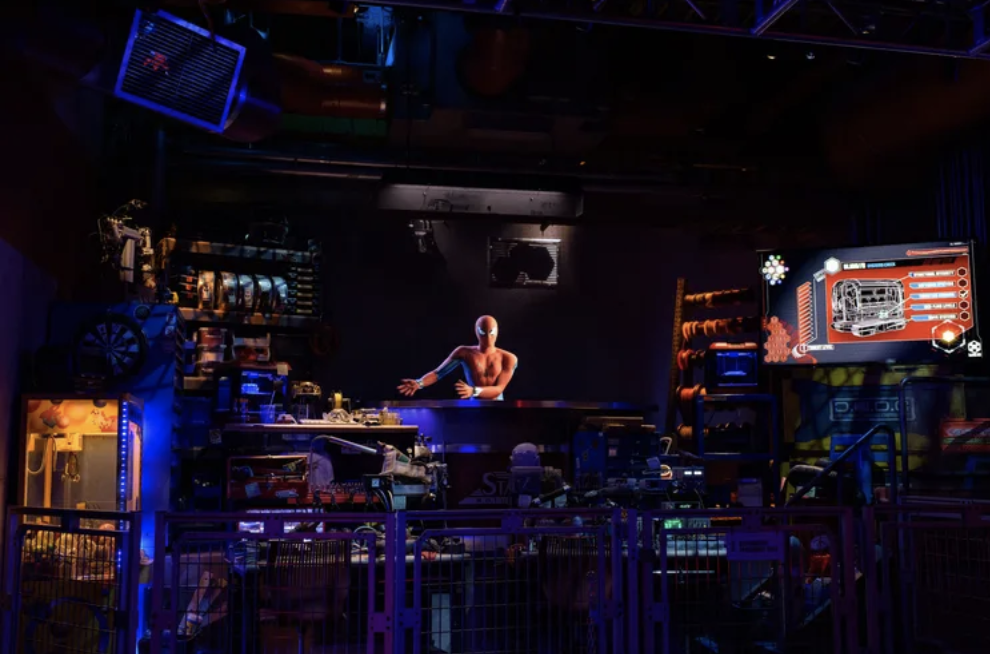 About New Technology and the Guest Experience on WEB SLINGERS: A Spider-Man Adventure

“We have invented a ton of technology to make it possible. With nothing in your hands, you get to reach out and sling webs. It’s like magic.” – Brent Strong, Executive Creative Director, Walt Disney Imagineering

“This attraction uses cutting-edge technology to let our guests sling webs like never before.  It uses brand-new gesture recognition software adapted just for this experience and it merges that with physical and digital sets.  But all that technology disappears in the experience and lets you feel like a Super Hero.” – Brent Strong, Executive Creative Director, Walt Disney Imagineering

How guests will experience their favorite Super Heroes inside Avengers Campus

“This is going to be the largest assembly of these heroes anyplace, anytime, anywhere. Avengers Campus is a place for them to live, work, play, protect and train. Our guests will have many different ways to interact with our heroes, through heroic encounters and also through epic action sequences in atmospheric shows.” – Dan Fields, Executive Creative Director, Disney Parks Live Entertainment 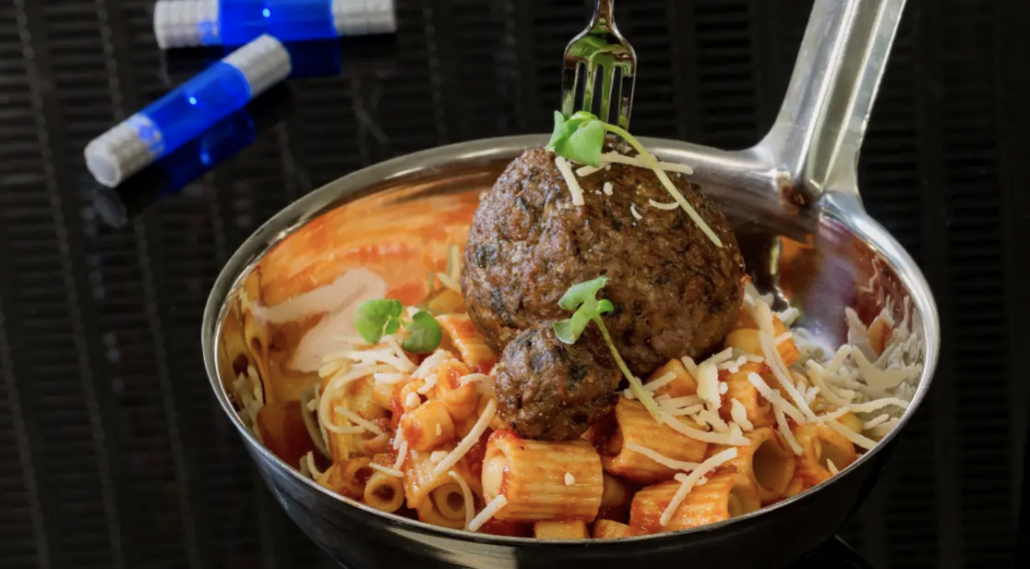 About the unique food offerings available throughout Avengers Campus

“We looked for clever ways to offer food slightly different than what most guests would expect in a theme park. I think we have done just that with all of our food and beverage offerings at Avengers Campus.” – Chef Jeremiah Balogh, Culinary Director, Disneyland Resort

“When creating the menu, it was important for us to understand the scale and scope to be true to the story of Pym Test Kitchen, and also keep true to our guests’ palates. This was a great opportunity for us to take what our guests love to eat, and merge that with how we aim to please with the deep level of storytelling. We had a lot of fun with it, and I think our guests will, too!” – Michele Gendreau, Director, Food and Beverage Experience Integration, Disneyland Resort

“Pym Test Kitchen is based on the movie ‘Ant-Man and The Wasp’ where you see that Pym Particles can shrink just about anything and grow just about anything. And how do we apply that to familiar food with unusual sizes? We’re shrinking problems and growing solutions. Food innovation meets science here at Pym Test Kitchen!” – Chef John State, Culinary Director, Disneyland Resort 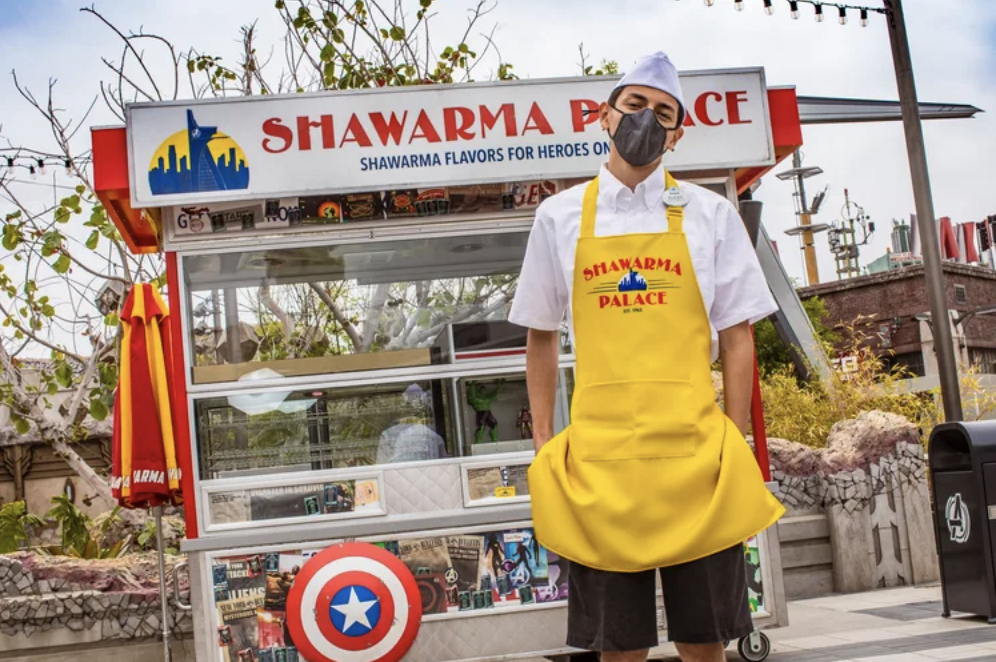 “The Avengers were so impressed by the chicken shawarma that they invited the owner to come down and open a location for them at Avengers Campus. It’s the authentic chicken shawarma, just like the eatery in New York: spice-rubbed, marinated, slow-roasted and tucked in warm bread. Served with garlic sauce. It’s a win.” – Chef John State, Culinary Director, Disneyland Resort

About food offerings for small humans

“For the budding scientists, we actually have their own little laboratory trays for the food. The PB&J Flavor Lab comes with peanut butter and jelly in a little Petri dish, where kids get to build their own sandwich with the little paddle and sliced Pym particle bread. And for the younger recruits looking to power-up, we also have Mini Pasta & Impossible Meat-balls and the Teeny Pym-ini. These are shrunken-down portions of the larger adult version, and a lot of fun for the kids to see next to each other.” – Chef John State, Culinary Director, Disneyland Resort 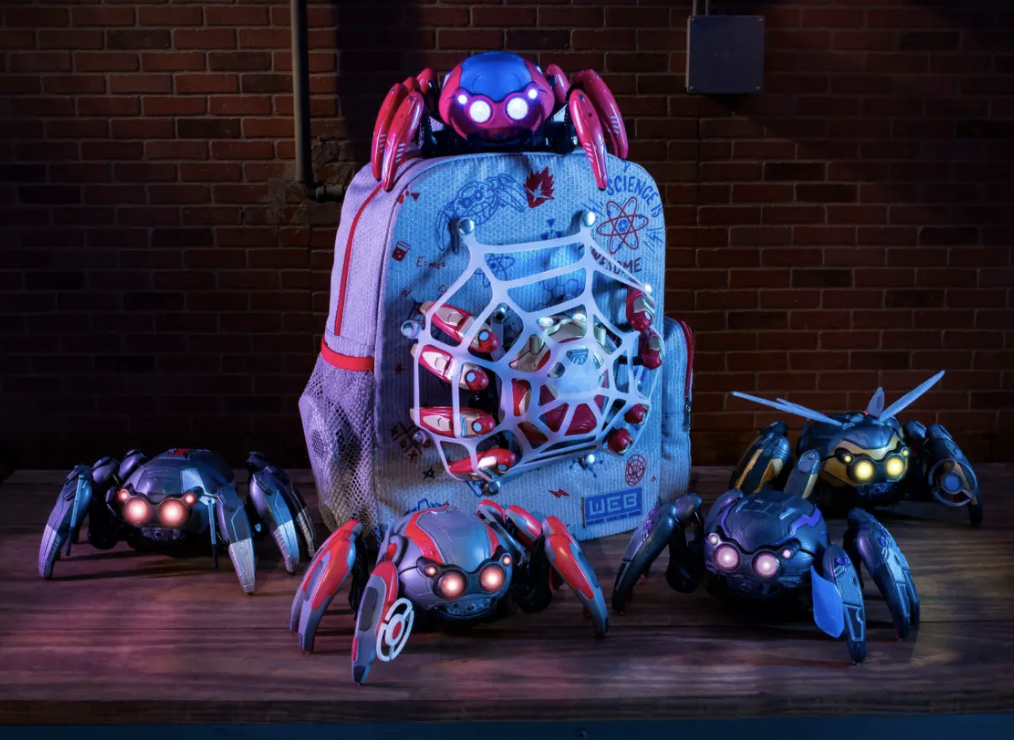 About merchandise at WEB Suppliers

“At WEB Suppliers, the Worldwide Engineering Brigade is showcasing some of its latest technology and inventions so that our recruits can gear up and practice for their next mission at Avengers Campus and beyond.” – Caroline May, Creative Director, Walt Disney Imagineering

About WEB Tech products and Spider-Bots!

“What’s really cool about the WEB Tech is it’s a fun piece of technology you can play with at Avengers Campus – and also take home.” – Caroline May, Creative Director, Walt Disney Imagineering

“At WEB SLINGERS: A Spider-Man Adventure, guests can sling webs like Spider-Man. They can also purchase WEB Tech bands that completely change their powers on that attraction. If they purchase an add-on, like the repulsor, this gives them a new power set.” – Caroline May, Creative Director, Walt Disney Imagineering

“Spider-Bots are a really cool toy! You can get the base model and also purchase tactical upgrades that are inspired by each Super Hero. What’s really fun is to find somebody else who has a Spider-Bot, or maybe you purchase another Spider-Bot, and then you can battle your bots together.” – Caroline May, Creative Director, Walt Disney Imagineering