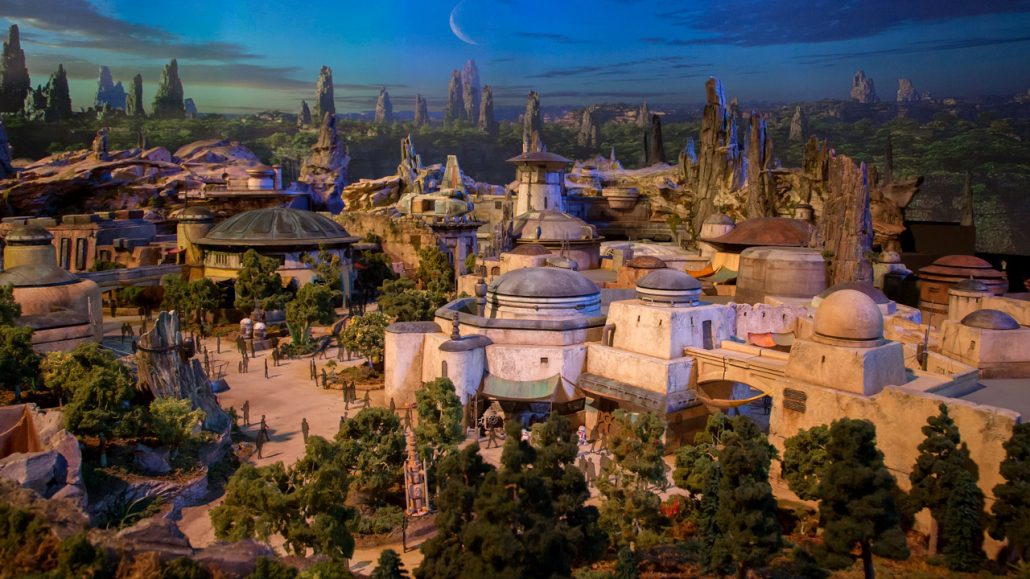 Star Wars: Galaxy’s Edge will be the largest single-themed land expansion at both Disneyland park and Disney’s Hollywood Studios when they open this summer and fall, respectively. While the land is epic in size, every detail in the land has been designed to have an authentic Star Wars feel. We have previously shared teasers of our two anchor attractions – Star Wars: Rise of the Resistance, where you will find yourself in the middle of an epic battle between the Resistance and the First Order, and Millennium Falcon: Smugglers Run, which allows you and your flight crew to take the controls of the fastest ship in the galaxy on a special mission. We’ve also previously announced that Oga’s Cantina will be a great place for you to grab a beverage, catch up on the latest gossip while R-3X, formerly the Starspeeder pilot on the original Star Tours, DJ’s a collection of new music.

Today we’d like to introduce a new series called “Building Batuu.” Batuu is the home of Black Spire Outpost, the location you will visit when you arrive at Star Wars: Galaxy’s Edge, which has become a haven for the galaxy’s most colorful — and notorious — characters. Over the next several months, we will be sharing more details about this entire new land, the offerings and attractions and how you can live your own Star Wars adventure in a galaxy far, far away.

You can dive deeper into Star Wars storytelling by engaging with the land through the Play Disney Parks app, if you desire a deeper level of immersion. But there is also plenty to see and do (and taste!) throughout Black Spire Outpost that wasn’t previously shared.

There will be several locations in the land to satisfy the appetites of most rogue adventurers:

Docking Bay 7 Food and Cargo – Chef Strono “Cookie” Tuggs has traveled throughout the galaxy following his longtime gig as the chef at Maz Kanata’s castle on Takodana and brings exotic flavors and unusual dishes to his traveling diner “Tuggs’ Grub.” 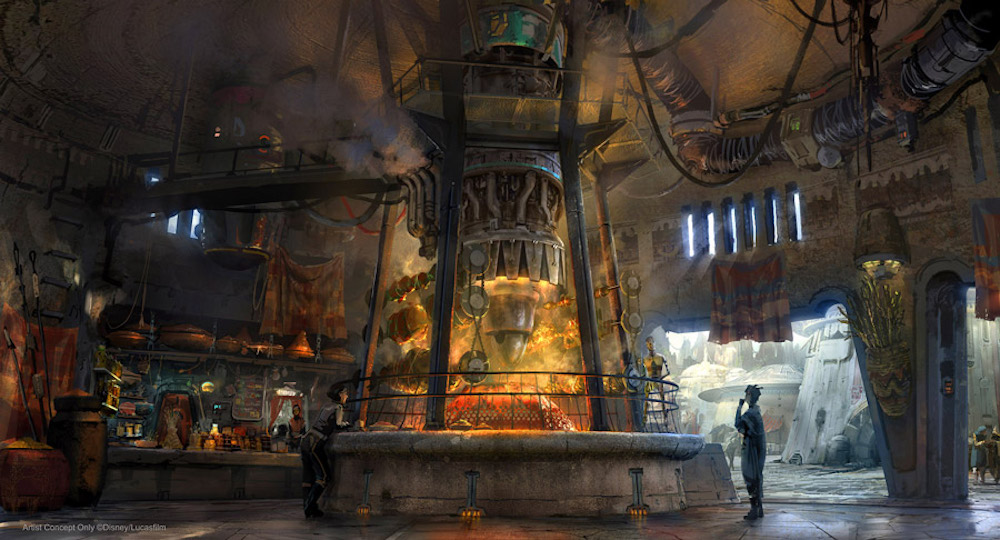 Ronto Roasters – A recycled podracing engine fires up a spit of exotic meats, meticulously turned by a former smelter droid, 8D-J8. Guests can even sample some of the tasty Ronto fare.

Milk Stand – The place to go to get your farm-fresh blue milk or green milk, direct from Bubo Wamba Family Farms.

Kat Saka’s Kettle – One of the many street market stalls, this grain vendor sells the ever-popular Outpost Mix (blend of sweet, savory and spicy popcorn).

For those looking to purchase in-story Star Wars merchandise and rare finds from across the galaxy, look no further than our many different Outpost stores and market stalls.

Dok-Ondar’s Den of Antiquities – For those in the know, Dok-Ondar is the Ithorian you seek for selling and buying rare and uniquely-valued items from across the galaxy and spanning all eras.

Savi’s Workshop – Handbuilt Lightsabers – Guests come to the workshop to meet with the Gatherers – a secretive group of people who have dedicated their lives to restoring balance in the galaxy by passing on their knowledge of Jedi lore and the Force. The workshop Master guides guests to customize and build their own unique lightsabers, and instructs them on the ways of the Jedi.

Droid Depot – Visitors to Mubo’s workshop can choose parts and construct their own individual astromech droids to accompany them on their journey, and then take them home with them.

First Order Cargo – A spaceport hangar bay serves as the temporary base and landing spot for the First Order. First Order officers have brought in crates of gear, uniforms and other supplies to win the hearts and minds of locals and visitors to Black Spire Outpost.

There are also several market stalls which sell a variety of merchandise such as:

Contact Small World Vacations for assistance with your Disney Vacation.