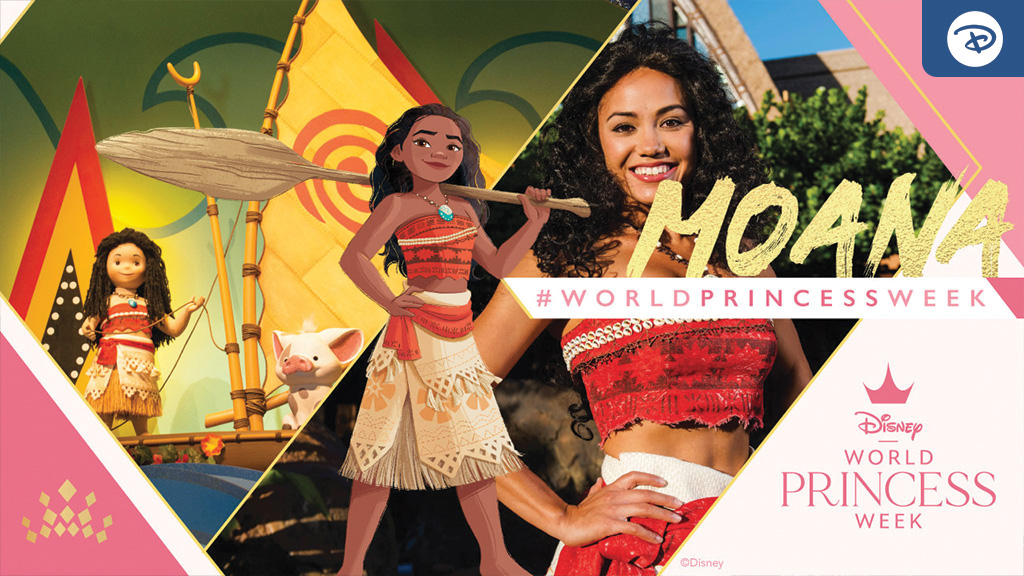 Today, we celebrate one of Disney’s most adventurous princesses, Moana. Moana is a curious and driven princess who sails out on a daring mission to prove herself as a master wayfinder. Though she has moments of self-doubt, she doesn’t back down from new challenges and discovers that when you sail beyond your reef with courage, you can cross any ocean. Check out all the ways guests can celebrate this sea-loving, strong-willed and courageous princess below! 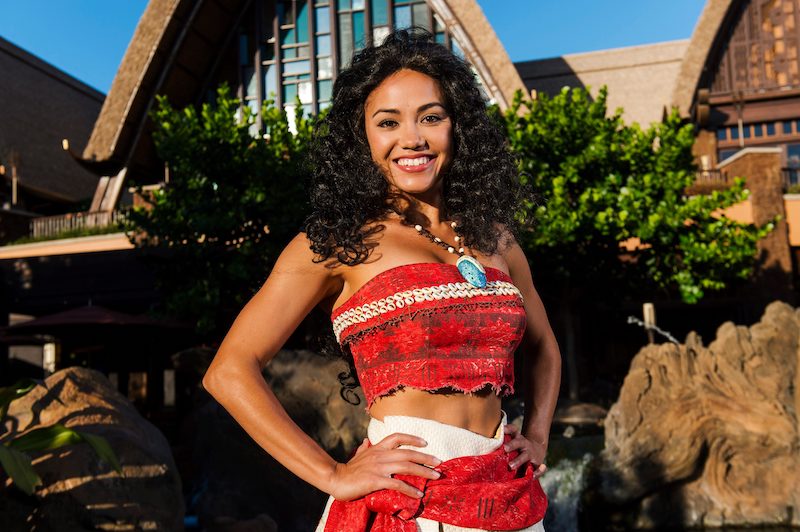 Meet Moana at Aulani, A Disney Resort & Spa! Disney’s Moana is an adventurous teen who teamed up with the demigod Maui on a daring voyage across the Pacific. Guests can be on the lookout for Moana as they enjoy their own exciting adventure with their family at Aulani Resort.

Aulani Resort is a vacation paradise in Hawai’i with a touch of Disney Magic, which is why so many Disney friends love spending time here! 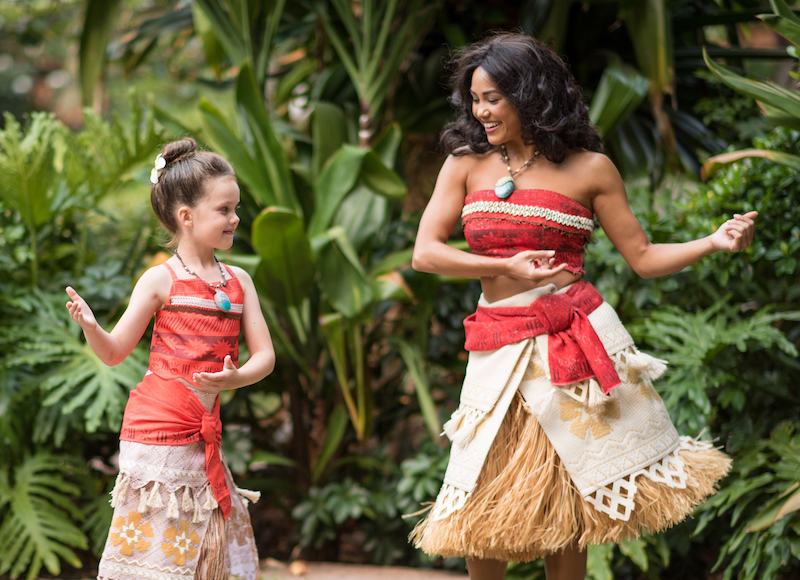 Parents can help their child or “keiki” get ready to start their own epic adventure at Painted Sky: HI Style Studio at Aulani Resort including the Moana Swim Makeover. In this luxurious studio, boys and girls ages 3-12 can choose from a variety of magical makeover packages, which include hairstyling, makeup, costumes and accessories – all infused with hints of Hawaii and a playful sense of Disney fun. Guest’s keiki can transform into a mermaid, dress for an adventure across O’ahu or even style in the fashion of their favorite wayfinding adventurer Moana of Motonui.

Painted Sky: HI Style Studio is in the Wai’anae Tower, just outside of Laniwai Spa. This relaxed-yet-sophisticated luxurious studio embraces the Hawaiian connection to nature and explores the cultural significance of the rainbows that so frequently grace the Hawaiian skyline. There is even a rainbow inside the studio through a special touch of magic, and guests listening closely as they enter the studio may hear the lovely sound of an ‘ukulele strumming a familiar Disney tune.

When they’re ready to hit the park, be sure they check out Harmonious – a brand new nighttime spectacular that brings together a multitude of Disney music and visuals that leaves guests in awe. Located at World Showcase Lagoon at EPCOT, witness choreographed moving fountains, dazzling lights, pyrotechnics, and lasers for an innovative performance inspired by the cultural influences behind favorite Disney stories such as “Moana,” “Aladdin,” “Brave” and “Mulan.” Harmonious is a brilliant centerpiece to the World’s Most Magical Celebration – celebrating the 50th anniversary of Walt Disney World Resort. 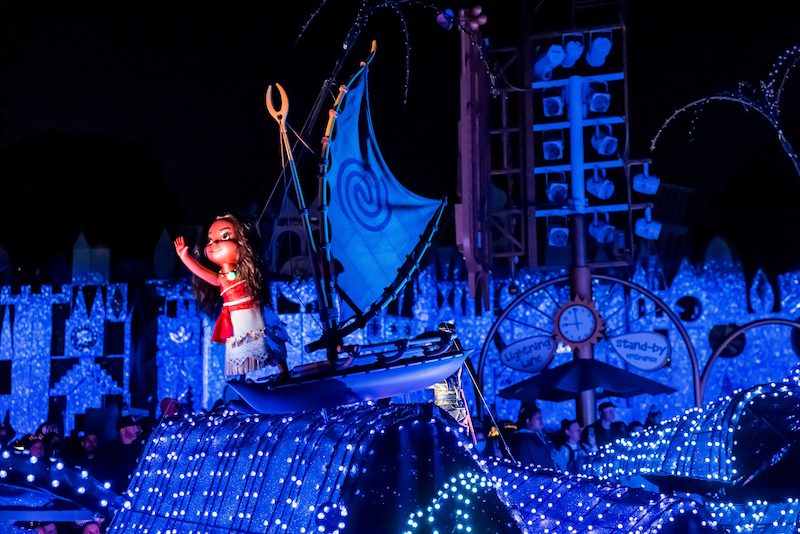 The “Main Street Electrical Parade” will end its limited time run on Sept. 1, 2022. In celebration of its 50th anniversary, the “Main Street Electrical Parade” added a grand finale float where guests can view both Walt Disney Animation Studios and Disney and Pixar characters together in a set of stylized scenes—including Moana! Led by the iconic train and drum unit featuring Mickey Mouse, Minnie Mouse and Goofy, this fan-favorite parade fills Disneyland park with iconic music, sparkling lights and fantastic floats, depicting scenes from movies like “Alice in Wonderland,” “Cinderella,” “Peter Pan” and more. Be sure guests book their stay at Disneyland Resort for a last chance to see some of their favorite Disney characters “ignite the night” with bright and colorful magic and imagination. View the entertainment schedule to plan your trip around this spectacular showcase before it goes away! 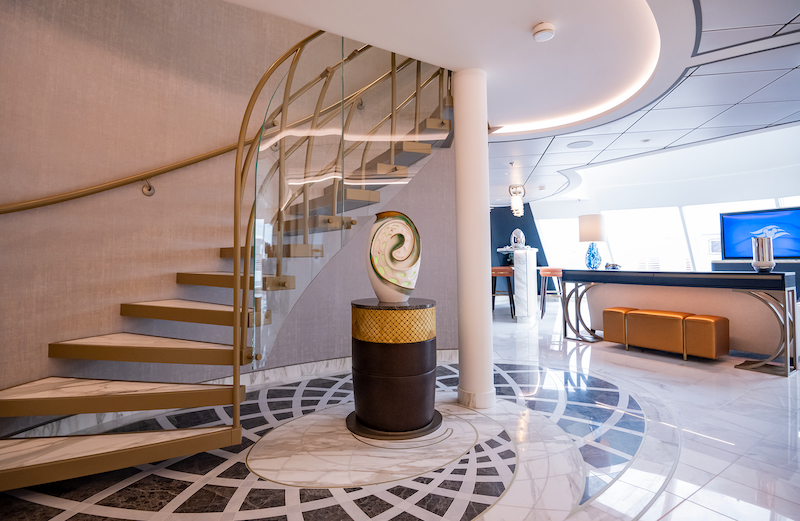 Aboard the Disney Wish, Disney Cruise Line’s newest ship, there’s a first-of-its-kind suite located where the sky meets the sea … inside one of the ship’s iconic funnels! Filled with materials, iconography and artwork from Walt Disney Animation Studios’ “Moana,” the 1,966-square-foot Wish Tower Suite leaves guests truly inspired. The signature art piece is a hand-crafted porcelain sculpture that seemingly comes to life, pulsing in a myriad of green hues amid soft chimes recalling the film’s distinctive soundtrack. Complete with two main bedrooms, a children’s room, a library that converts to a bedroom and a whopping four and a half bathrooms the Wish Tower Suite can fit up to eight people! Located on the upper-level loft, the lavish and serene main bedrooms feature king beds, walk-in closets and stunning floor-to-ceiling windows overlooking the living area below and out to the views beyond.