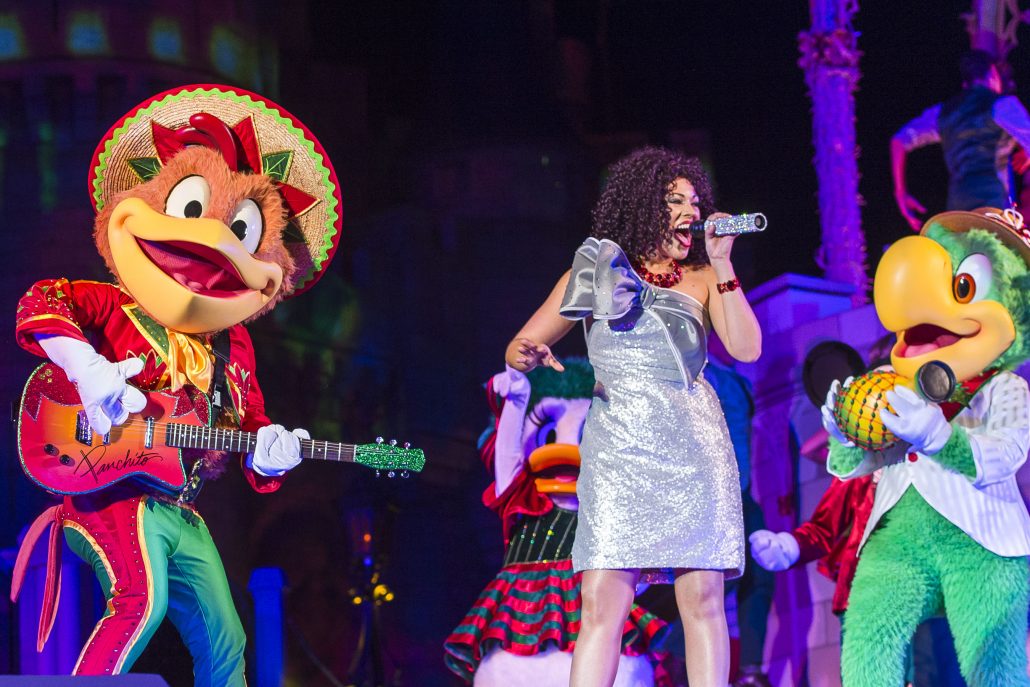 There is no better place to celebrate the most wonderful time of the year than The Most Magical Place on Earth – especially during The World’s Most Magical Celebration for the 50th anniversary of Walt Disney World Resort! ‘Tis almost the season of enchanting holiday entertainment and yuletide-themed décor, so read on for more jolly details. 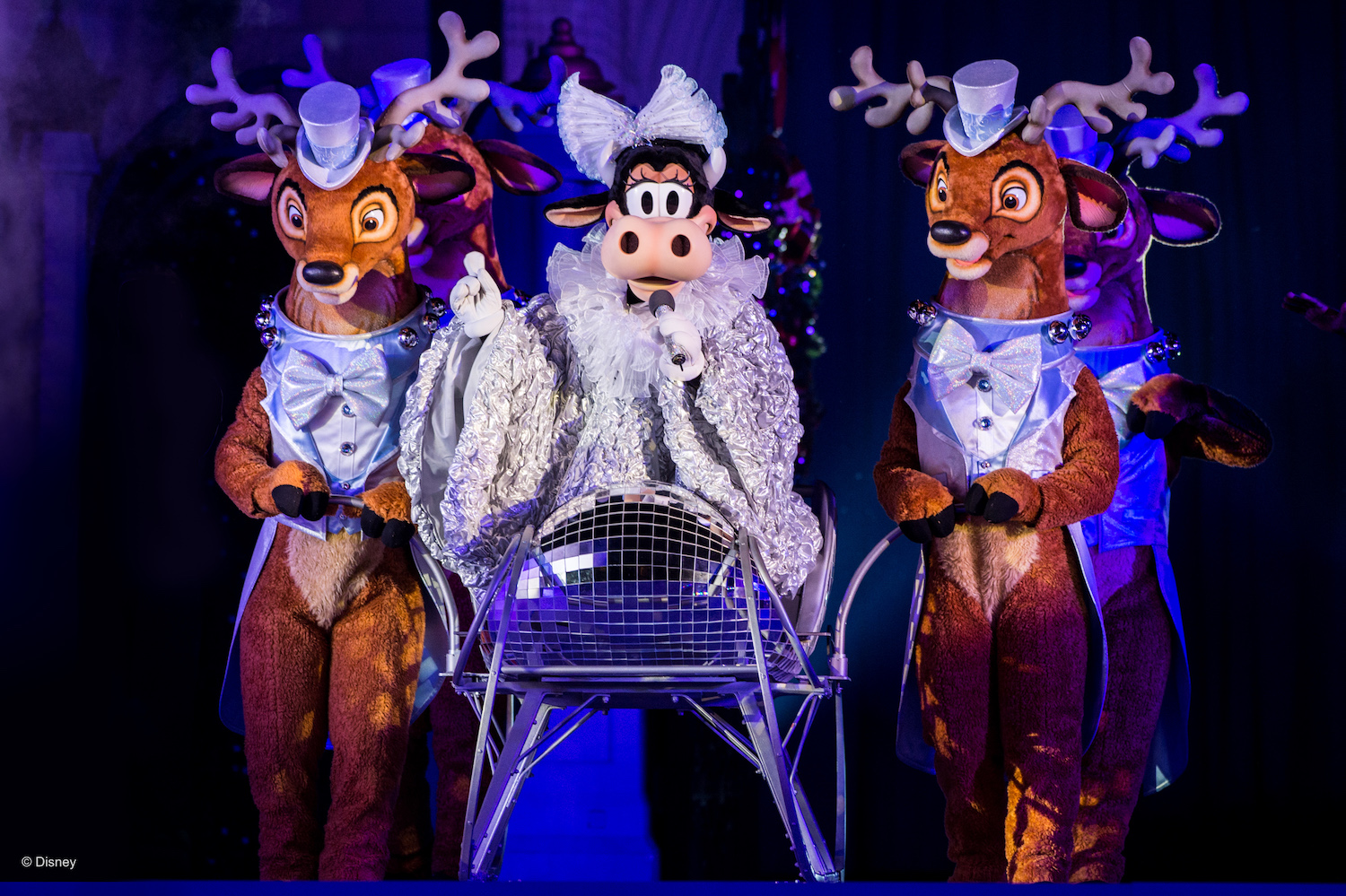 Guests visiting Magic Kingdom Park during regular operating hours can still join in on the holiday fun! On evenings when Disney Very Merriest After Hours is not being held, Cinderella Castle takes on a festive appearance with special projection effects, providing a colorful backdrop for our Guests’ photos. Throughout the evening, bursts of holiday magic will transform Cinderella Castle with a rotating series of designs, followed by a stunning transition in which the iconic Magic Kingdom Park landmark will shine as a Beacon of Magic, illuminating the night with an EARidescent glow.

Guests will encounter Jolly Old St. Nick during special appearances across Walt Disney World Resort through Dec. 24 of this year. Catch sight of Santa cruising down Hollywood Blvd. in his candy-apple red convertible at Disney’s Hollywood Studios during the Santa Claus Merry Motorcade or venture over to Disney’s Animal Kingdom Theme Park, to spot Santa voyaging across the Discovery River, spreading the joyous spirit of the season from a festive flotilla. Santa Claus will also pay visits to Magic Kingdom Park, EPCOT and Disney Springs, where Guests will have individualized time to wave hello and share their Christmas wishes.

Experience Disney-Themed Trees and Much More at Disney Springs

At Disney Springs, Christmas and holiday cheer can be found around every corner. The Disney Springs Christmas Tree Stroll presented by AdventHealth brings elaborately decorated Disney Christmas trees to the neighborhoods throughout Disney Springs. Each of the twinkling trees will be themed to personify beloved Disney characters, stories and celebrations.

Special festive décor and live holiday performances will add an extra touch of wonder to holiday shopping. And in the evening, Guests visiting Town Center will experience a magical snowfall, bringing the spirit of the North Pole to Central Florida. For the perfect wrap-up to a holiday visit to Disney Springs, Guests can head to Jock Lindsay’s Holiday Bar; back by popular demand, this seasonal favorite has returned with yuletide touches alongside festive food and craft cocktails – there’s something on the menu for everyone! 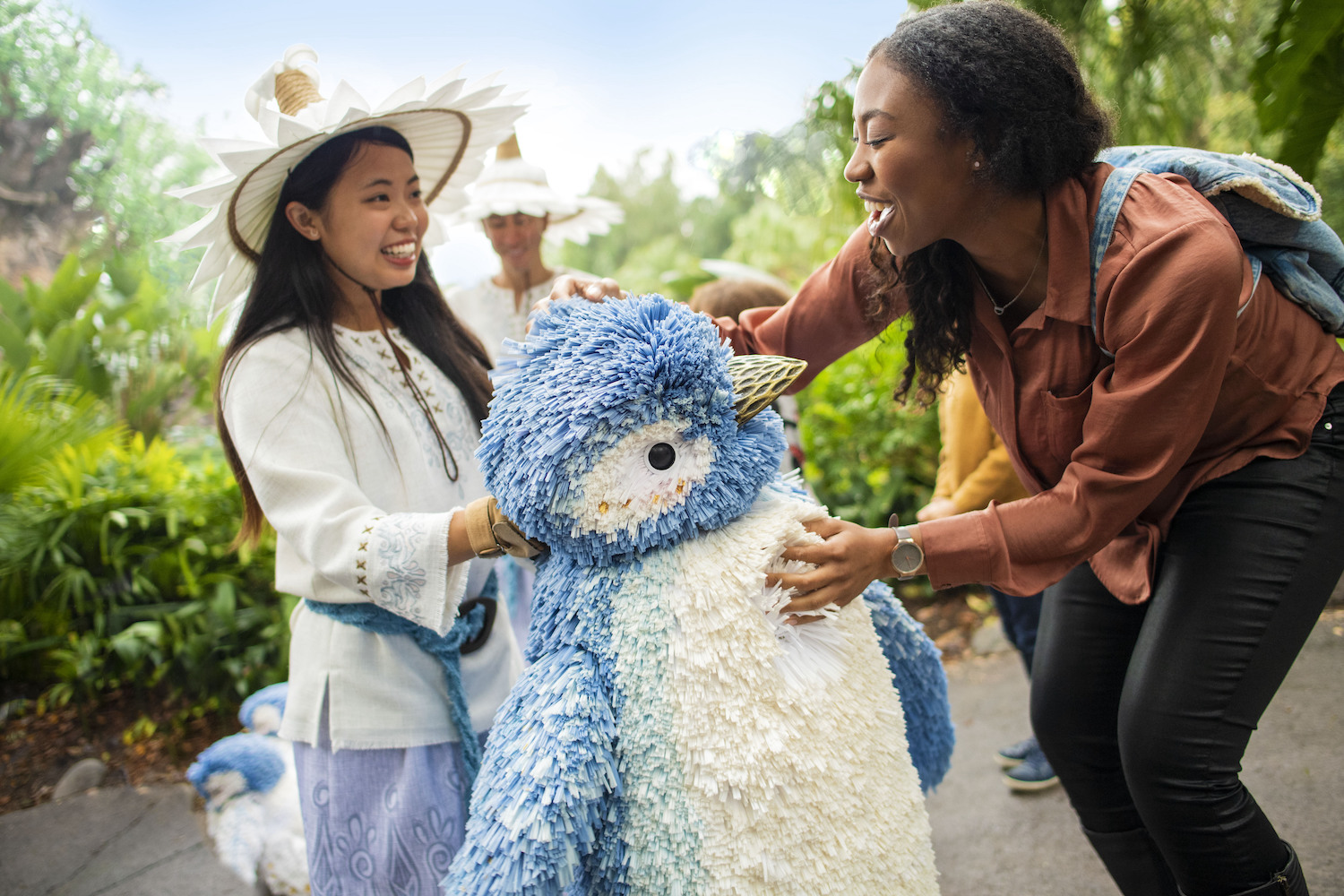 During the holiday season and beyond, nature holds the truest magic at Disney’s Animal Kingdom Theme Park. As a part of this year’s yuletide entertainment, Discovery Island will spring to life with a Merry Menagerie of winter animals, realized in the form of life-size, artisan-sculpted puppets. Reindeer, foxes, polar bears, penguins and more interact with Guests, accompanied by serenading musicians as they create a whimsical display and playful atmosphere for Guests of all ages to enjoy.

As Guests explore the park, they may spot Goofy, Chip ‘n’ Dale and other Disney character friends bringing their own style of festive flair to the Discovery River, as they jingle through the jungle to the rhythm of the holidays.

And on nights when the park is open after dark, the Tree of Life awakens as a series of wintry tales emerge from within, complemented by a familiar and heartwarming holiday-inspired musical score. Between awakening moments, the Tree of Life joins the Beacons of Magic in celebration of the 50th Anniversary of Walt Disney World Resort, as magical fireflies gather to produce a warm and glorious light, calling forth the EARidescent magic of nature.

Sunset Seasons Greetings returns to Disney’s Hollywood Studios, where each evening holiday magic transforms the famous Hollywood Tower Hotel into a Muppets gingerbread masterpiece, a “Toy Story” toy hotel, a snowy corner of Arendelle and a Dickensian village from “Mickey’s Christmas Carol.”  As a part of the 50th anniversary celebration at Walt Disney World Resort, the festive fun continues when Hollywood Tower Hotel becomes a Beacon of Magic at night, awash in an EARidescence evoking all the glimmer and shimmer of the golden age of imagination and adventure.

Just in time for the holidays, “For the First Time in Forever: A Frozen Sing-Along Celebration” adds a festive finale, featuring everyone’s favorite snowman, Olaf, and celebratory songs of the season.

Unlock Traditions from Around the World at EPCOT

Guests are invited to share in the sights and sounds of some of the world’s greatest holiday festivities during the EPCOT International Festival of the Holidays presented by AdventHealth, where time-honored traditions come alive through music, dance, and the storytelling heritage of the countries of World Showcase. Beginning on Nov. 26 through Dec. 30, Guests can celebrate with a spirited array of seasonal entertainment. Stay tuned for new updates about this year’s offerings.