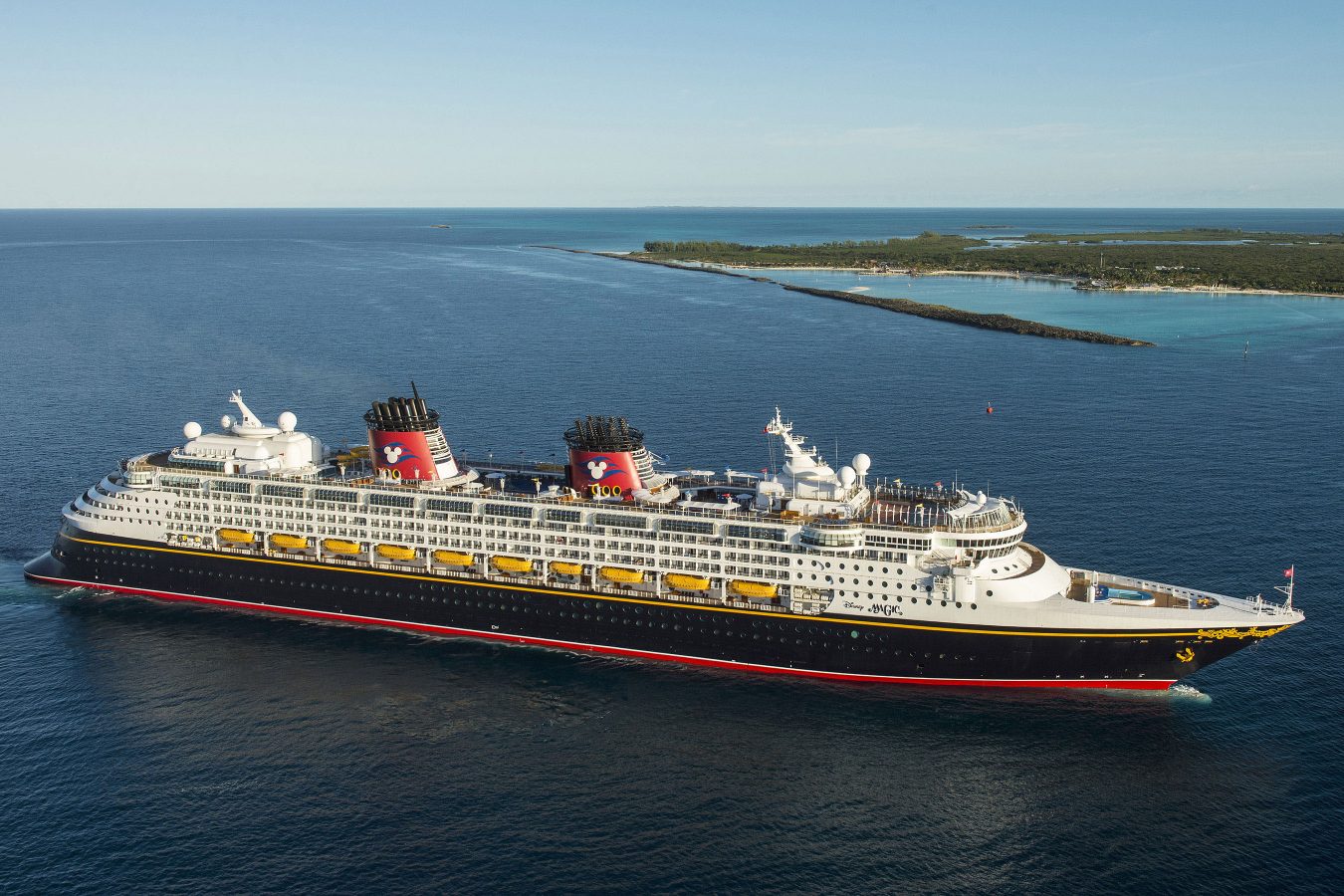 The ship’s horn on the Disney Fantasy and Disney Dream is a prominent element of the “Sailing Away” deck party at the start of every cruise and is quite the musical talent. The horns are able to sound the first musical line of “When You Wish Upon a Star” as well as the second line of the song (“makes no difference who you are”) plus, several measures of “Yo Ho (A Pirate’s Life for Me),” “It’s a Small World,” “Be Our Guest,” “Hi Diddle Dee Dee (An Actor’s Life for Me)” and “A Dream is a Wish Your Heart Makes.” New in October 2015, the Disney Dream added “Do You Want to Build a Snowman?” to her horn’s musical repertoire. 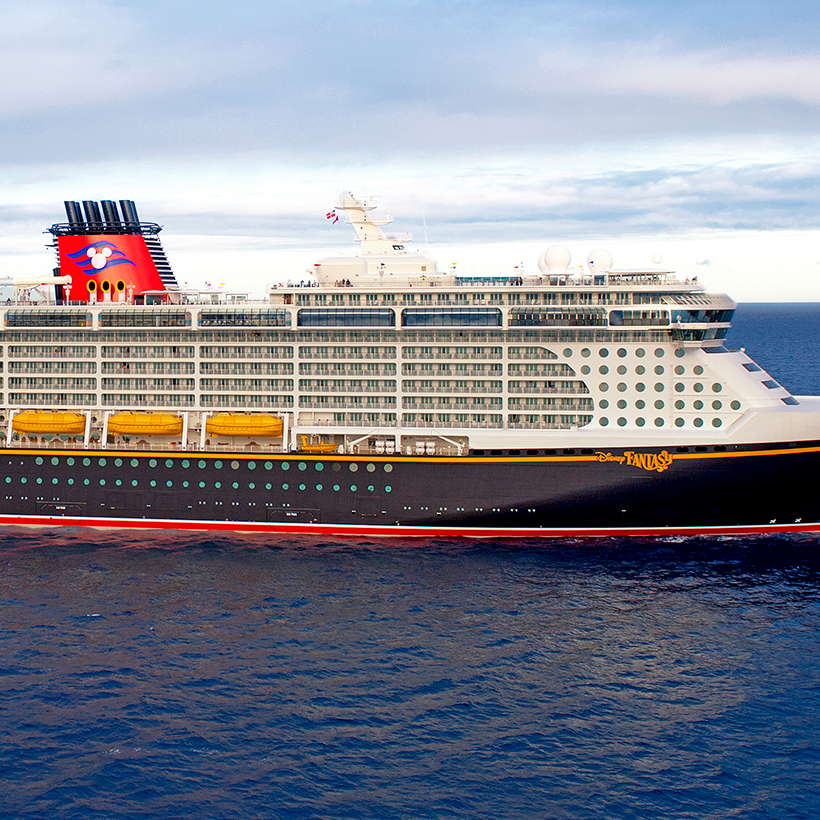 The characters Dumbo and Timothy on the Disney Fantasy’s stern weigh in at more than 2,300 pounds. Dumbo is a little more than eight feet long from head to tail with an “ear span” of seven feet. Timothy sits 2’6” tall on Dumbo’s hat and is holding a paint brush that’s about 3’10” long. Dumbo was sculpted from large foam blocks by Walt Disney Imagineering artists in Glendale, Calif. The sculpted pieces were then shipped to Florida where Disney craftsmen and artists created him in fiberglass and paint over a frame of marine-grade stainless steel. The duo was installed in Papenburg, Germany.

The Sorcerer Mickey Mouse on the Disney Dream’s stern is about 14 feet long. Constructed of stainless steel and fiberglass, it weighs approximately 2,500 pounds. The “ornament” was sculpted at Walt Disney Imagineering in California, structurally designed by engineers at Disney Cruise Line and Meyer Werft in Germany, manufactured in Sarasota, Fla., finish-painted in Orlando, and then transported by ship to Germany for final installation on the Disney Dream. From sculpture to the stern of the Disney Dream was a journey of about 15,000 miles for Mickey Mouse.

The Art Nouveau-inspired chandelier on the Disney Fantasy cascades downward from a massive, illuminated stained-glass flourish on the ceiling in vibrant hues of greens and blues. The chandelier itself is more than 10 feet in diameter, a one-of-a-kind work of art evoking a peacock in stained glass and more than 60,000 clear Swarovski crystal beads. The Disney Dream’s Art Deco-style chandelier sparkles with thousands of hand-crafted crystal beads and glows with colorful glasswork. Crafted in Brixen, located in Northern Italy, the chandelier is 22 feet diameter at the ceiling plate and comes down 13 feet from the ceiling.  It is 24kt gold plated with a total of 88,680 Swarovski crystal beads ranging in size from 6mm to 12mm.

Every Disney Cruise Line ship has an atrium lobby statue celebrating a classic Disney character. The Disney Fantasy’s bronze-cast pièce de résistance is Mademoiselle Minnie Mouse, dressed in vintage fashion with a parasol and steamer luggage at her side and Admiral Donald is striking a pose on the Disney Dream. They are the subject of as many memorable vacation photos as their counterparts: Mickey at the helm (Disney Magic) and Ariel sitting pretty (Disney Wonder).

Walt Disney Imagineers elevated the AquaDuck water coaster on the Disney Dream and Disney Fantasy in order to maximize space on the deck. And with the AquaDuck in place, they had room for their imaginations to concoct yet another “ducky” family activity on the Disney Fantasy—AquaLab! This 1,800-square-foot get-wet area on Deck 12 is filled with pop jets, geysers and bubblers … and ultimately a lot of silly laughter!

Muppet Pepe the King Prawn, who stars in the ship’s new Midship Detective Agency game, has his very own stateroom on the Disney Fantasy and Disney Dream. Located down the hall from the youth clubs, the door to stateroom 5148 ½ is decked out with Pepe’s activity schedule, photos of his Muppet friends and notes from guests. While no one has ever actually seen the Muppet-sized door open, Pepe has not been shy bragging about the space reserved just for him.

Sips, sights and sounds of the diverse cities, countries and cultures of Europe—that’s what’s in store all in one evening and all in one place aboard the Disney Fantasy. The adult nightlife district Europa features five clubs and lounges that treat the senses to a taste of Ireland, England, France and Italy plus stunning skylines and signature cocktails inspired by Russia, Greece, Hungary and Spain.

You can celebrate special occasions with a one-of-a-kind toast aboard the Disney Dream. French champagne-maker Taittinger crafted a signature bubbly for Pink: Wine and Champagne Bar, with a pink elephant from the classic film “Dumbo” adorning the bottle.

Two huge mosaic walls based on the Disney•Pixar animated film “Finding Nemo” are showcased in Cabanas casual-dining restaurant. Hand-crafted uniquely for the Disney Fantasy and Disney Dream by Italian artists, each wall is more than 25 feet wide and more than 8 feet high and contains approximately 194,500 tiles in 200 colors of hand-crafted Venetian enamel. A team of nine artists created the mosaics based on Pixar designs depicting the underwater world of Australia’s Great Barrier Reef and characters featured in the motion picture.

Ahoy, mateys! Subtle nautical motif adorns Disney Cruise Line ships, including traditional maritime symbols and lettering that only the conscientious sailor can spot. For example, on the carpet in the Disney Fantasy and Disney Dream stateroom corridors, a ship’s wheel encompasses a map of the world and nautical flags spell out the name of the ship.

When the Disney Fantasy sailed into New York for her christening on March 1, 2012, the ship made the Statue of Liberty look slender. At 130,000 gross tons the Disney Fantasy is more than 500 times heavier than Lady Liberty. While the baby elephant Dumbo serves as the ship’s stern character, in real life he would have to gather 24,266 adult male African elephants to match the weight of the Disney Fantasy.

Among the leading-edge technical effects in the Walt Disney Theatre is an infrared camera with motion tracking, allowing the movement of performers to be blended with projected digital animated effects.

You can settle into luxurious comfort in staterooms and suites featuring plush bath towels and deluxe bed linens by Frette. Founded in 1860 in France and now based in Milan, Italy, Frette created custom-design bath towels and bed linens for the Disney Fantasy and Disney Dream with what is regarded as the world’s finest cotton, from El Amria in Egypt. Elsewhere on Disney Fantasy and Disney Dream, the two adult-exclusive restaurants, Palo and Remy, use all Frette dining linens.

A “light point” is shipbuilders’ lingo for “anything that’s a light.” There are approximately 80,000 light points on the Disney Fantasy and Disney Dream— “double the normal number for a ship this size,” according to Meyer Werft, the shipyard in Germany where the Disney Fantasy and Disney Dream were built. The large number is the result of Disney’s flare for theatrical experiences—accomplished primarily with LEDs and other environmentally friendly lighting.

Star Wars: Millennium Falcon in Disney’s Oceaneer Club on the Disney Dream is one of the most detailed youth spaces ever designed for a Disney ship. It features more than 1,000 LED lights, four animated props—including R2-D2 and Luke Skywalker’s training remote—and dozens of unique sound effects. Interactive buttons, levers and controls allow children to trigger special detours through the galaxy, such as the Death Star trench run sequence from the original 1987 Star Tours attraction at Disneyland.