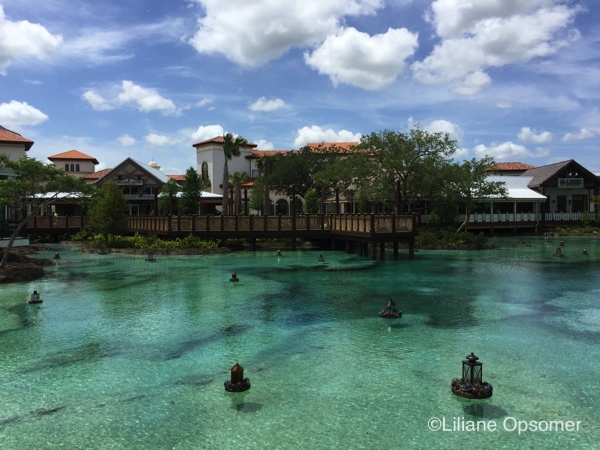 Disney Springs, formerly known as Downtown Disney, is a shopping, dining, and entertainment complex along the banks of Village Lake that underwent a major overhaul and has become a destination on its own.  And while The LEGO store, Ghiradelli’s, Raglan Road Irish Pub, and The Earl of Sandwich were not put on the chopping block, much has changed at Disney Springs. 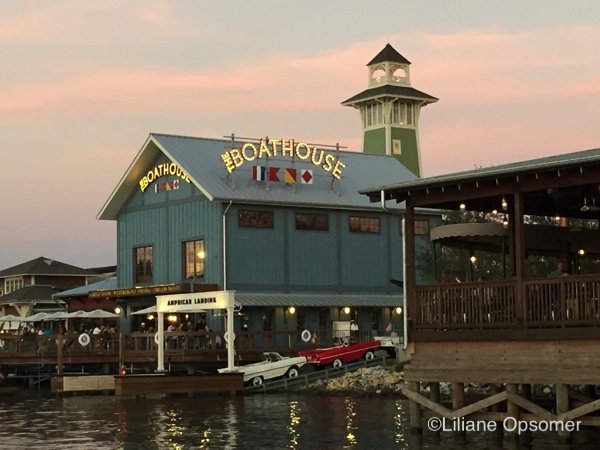 There is the upscale waterfront seafood eatery, THE BOATHOUSE, complete with a launch dock for vintage amphicars, Morimoto Asia of Iron Chef Masaharu Morimoto fame, and Jock Lindsey’s Hangar Bar, named after a character from the Indiana Jones movie, looking like a 1930s-era airplane hangar with a theming one simply must see. 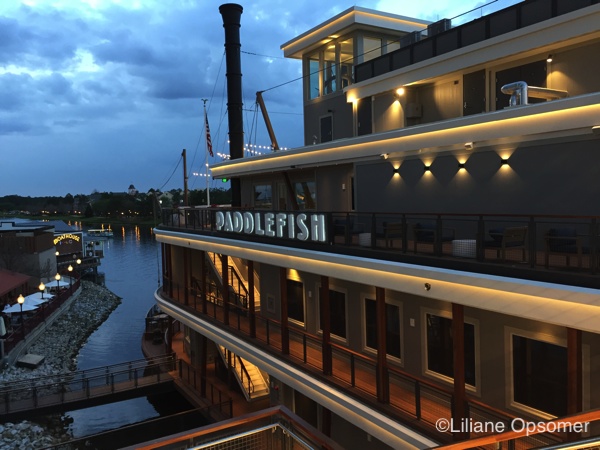 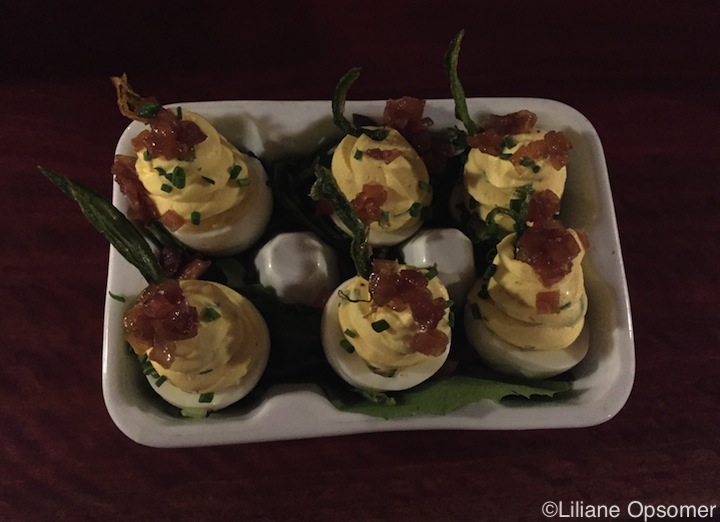 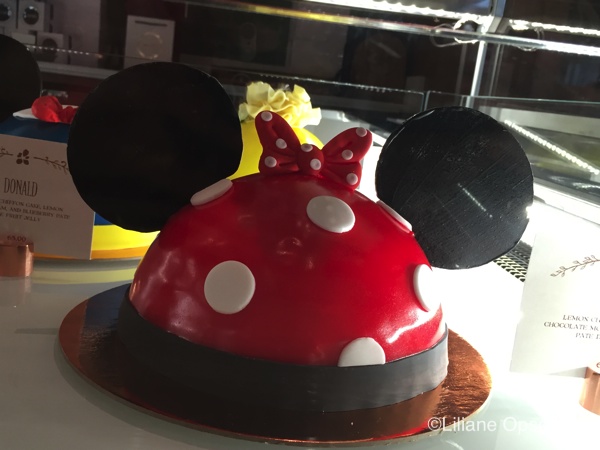 Disney Springs is also nirvana for those with a sweet tooth. Check out The Ganachery, Erin McKenna’s Bakery NYC, Vivoli il Gelato, Sprinkles, and Aristocrepes. And don’t go home without tasting one of the amazing cakes from Amorrette’s Patisserie. 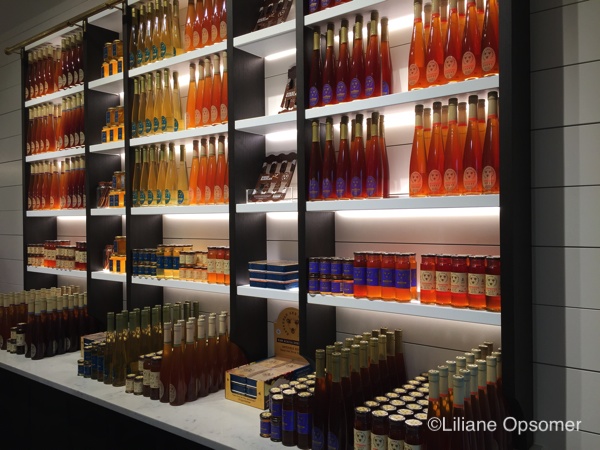 One of the newest sweet additions is Savannah Bee, where guests can taste and purchase different honeys and other honey-infused products, such as nature beauty creams and wine. All products offered at Savannah Bee are made with locally grown, all-natural honey. 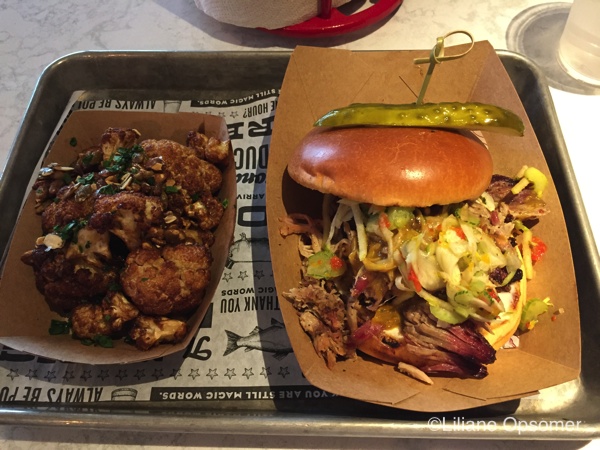 The best over-the-counter eateries are Blaze Fast-Fire’d Pizza (serving mouthwatering thin-crust pies made to order) and the newly opened quick-service The Polite Pig (preparing barbecue in an open kitchen and offering Southern side dishes such as a tomato and watermelon salad, mac and cheese, and smoked corn with lime butter). 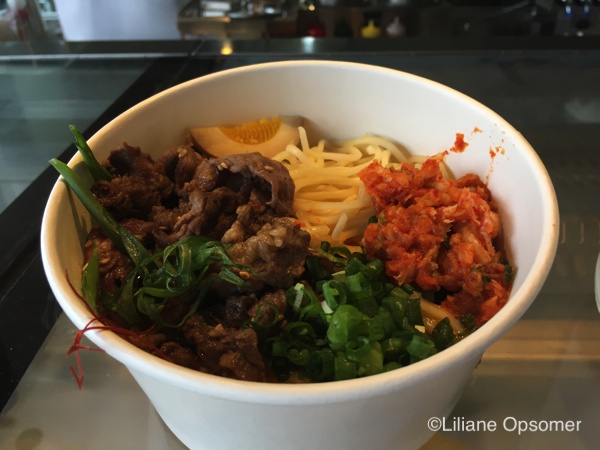 For small hungers, there are the food trucks at Exposition Park and restaurants such as Morimoto Asia and Frontera Cocina that now offer to-go windows. 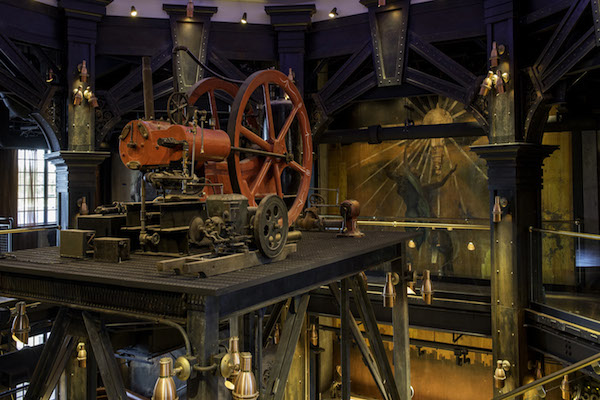 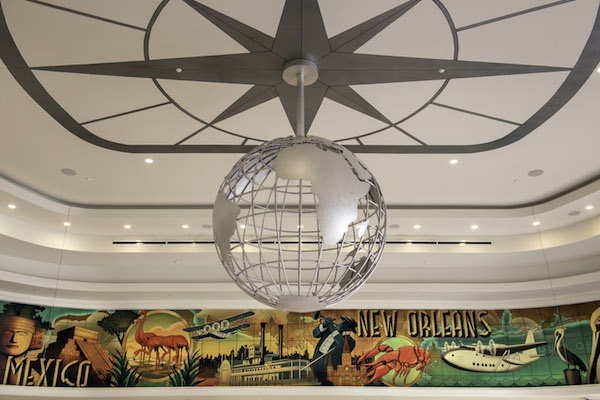 Adjacent to this amazing venue get ready for Pizza Ponte, for a quick bite any time of the day or night, Maria & Enzo’s, a restaurant showcasing the flavors of Southern Italy, and Enzo’s Hideaway, a lounge reminiscent of the
speakeasy days. 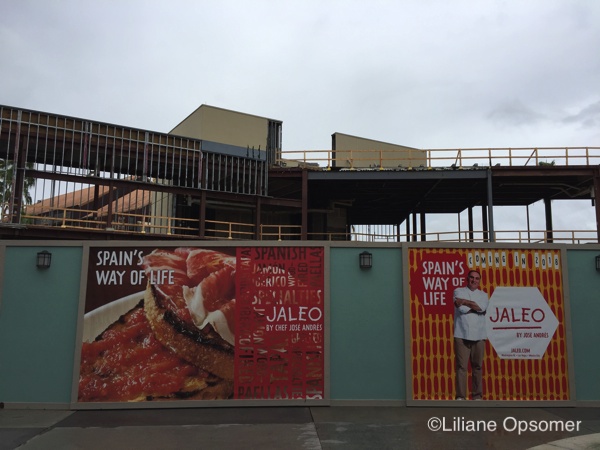 2018 will welcome Jaleo, a Spanish restaurant from Chef José Andrés at the West Side. I can’t wait for tapas, paella, and hand-carved Jamon Iberico de Bellota. Last but not least, also in 2018, Town Center will see the opening of a new concept restaurant by Wolfgang Puck. The Wolfgang Puck Bar & Grill will highlight many of Puck’s signature dishes. 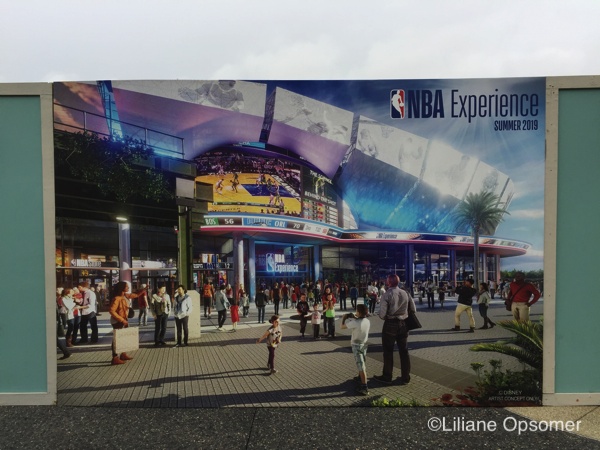 Coming in the summer of 2019 is The NBA Experience. The building on the premises of the former DisneyQuest will house a state-of-the-art space, including interactive games and competitions, immersive experiences, a retail store, and an adjacent restaurant.

Shopping is King at Disney Springs 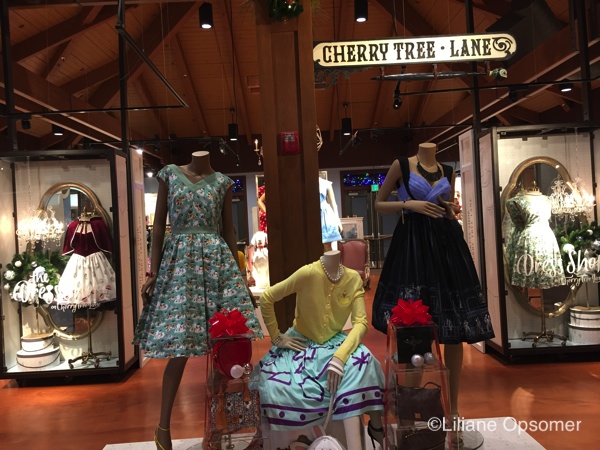 Marketplace is still home to The World of Disney, the largest Disney merchandise store in the world, but make sure to visit Marketplace Co-O, which houses a group of stores such as D-Tech, Disney TAG, and Disney Centerpiece. My favorite store inside Marketplace Co-O, however, is The Dress Shop on Cherry Tree Lane. The dresses inspired by Disney attractions and characters are absolutely fabulous. I dream of walking into the store and telling the salesperson that I’ll take one of each! 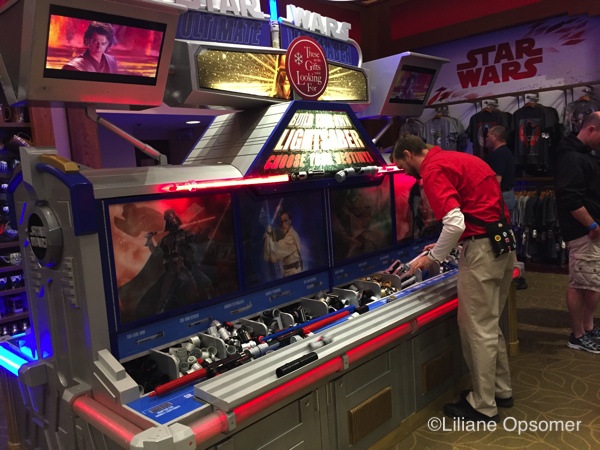 Marketplace Fun Finds reopened as Star Wars Trading Post where guests can purchase all kinds of Star Wars merchandise. Kids will love to build their own droid or light saber station. 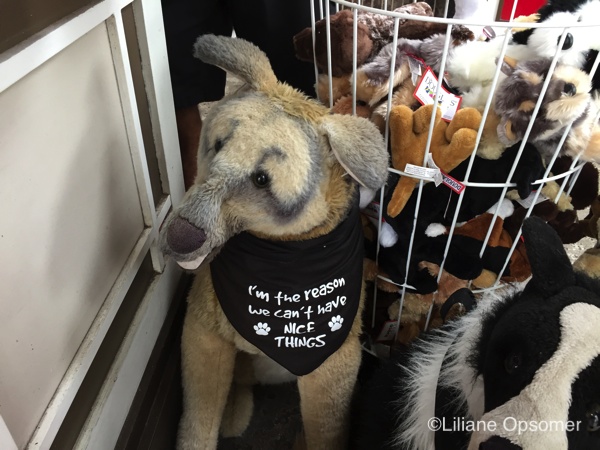 Outside of the Star Wars Trading Post, I love Happy Hound, a kiosk specializing in fun collars, tags, toys, and other dog accessories. 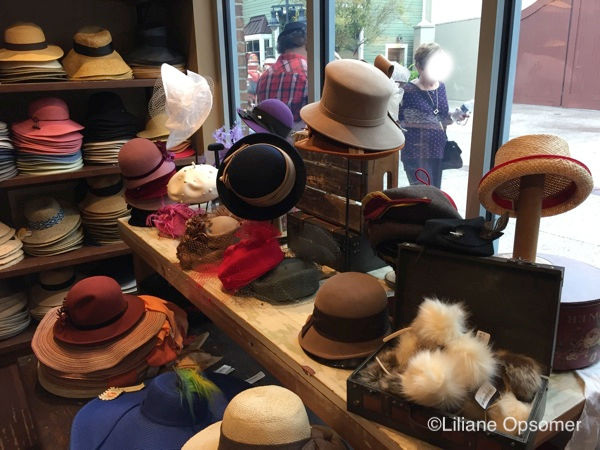 The Landing is not a shop-less land either. Here you will find Erwin Pearl, APEX by Sunglass Hut, Sanuk, Havaianas, and The Art of Shaving. If you are in the market for a hat to be worthy of a visit to the Kentucky Derby, then you should visit Chapel Hat. 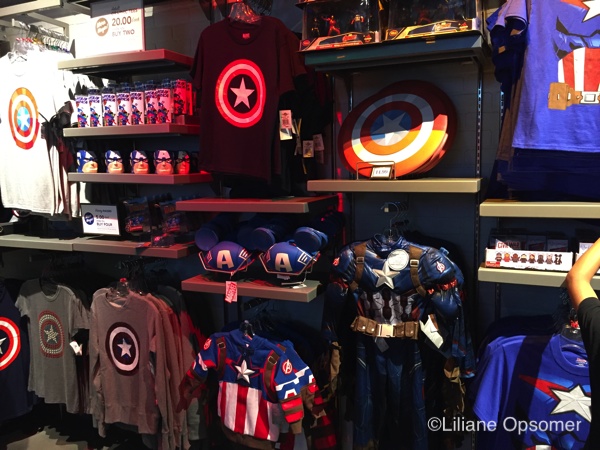 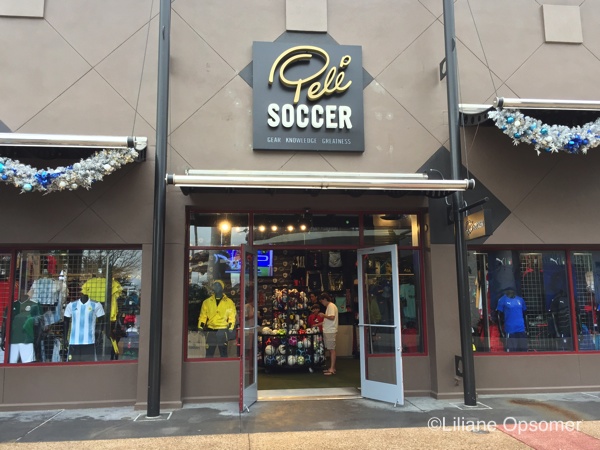 Sosa Family Cigar, Curl by Sammy Duvall, Fit2Run, Something Silver, and Star Wars Galactic Outpost are joined by Super Hero Headquarters and Pelé Soccer on the West Side.

With so much to see, do, and enjoy, Disney Springs has become a destination in its own rights!