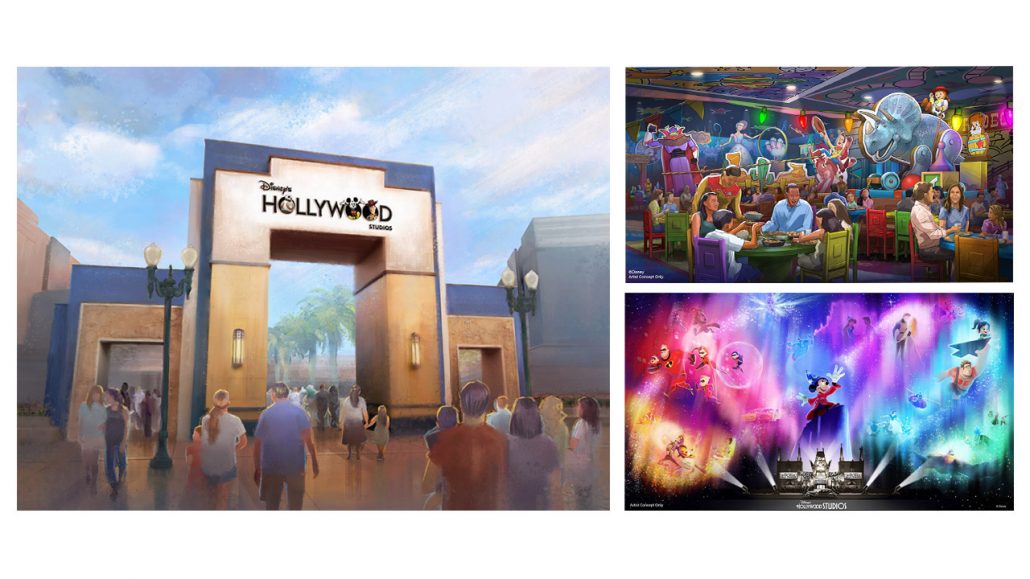 Mickey and Minnie Mouse led a cavalcade of favorite Disney characters down Hollywood Boulevard to celebrate the past, present, and the new, exciting future of Disney’s Hollywood Studios as the park continues to transform into a thrilling destination where you can let your adventure begin.

Our anniversary celebration included some exciting updates we think you’ll enjoy, including the announcement of a new Toy Story Land restaurant as well as a Toy Story pop-up merchandise location and new logo for the park.

The new table service restaurant coming to Toy Story Land, Roundup Rodeo BBQ, will surround you with a kaleidoscope of toys, games, and playsets, providing yet another unique, fun, family-friendly dining experience that could only be had in the land.   A pathway leading from the main promenade of Toy Story Land will lead Guests to the entry of the restaurant, where they’ll be greeted by a large, oversized box that has been decorated with crayons, stickers, and toothpick flags to create a festive entry awning.

In celebration of the June debut of Disney•Pixar’s “Toy Story 4,” a new pop-up merchandise location will be opening later this month at Disney’s Hollywood Studios. You’ll be able to find it at the exit of Toy Story Mania!, and it will include a variety of products commemorating the new film.

A star-studded cavalcade closed with a ceremony revealing the park’s new logo, which emphasizes the transformation Disney’s Hollywood Studios is undertaking.  Look close and you’ll see the new logo features BB-8 from Star Wars, Woody and Mickey himself.

And the day’s anniversary celebration wraps with the much-anticipated debut of “Wonderful World of Animation” – the park’s new nighttime projection show.  During the show, the façade of the Chinese Theatre is magically transformed, displaying a stirring tribute to animation that includes spectacular sequences celebrating themes like magic, family, adventure, romance and friendship.

Each theme is brought to life through unforgettable moments from beloved films—like “Sleeping Beauty,” “The Incredibles,” “Coco” and many more.  Each night, this new show will lead into the popular “Star Wars: A Galactic Spectacular.”  Check out our earlier “Wonderful World of Animation” story for more details.

And on Aug. 29, 2019, Star Wars: Galaxy’s Edge will allow you to live your own Star Wars adventures in a new, 14-acre immersive land, followed in spring 2020 by the planned opening of Mickey & Minnie’s Runaway Railway, the first ride-through attraction in Disney Parks history to feature Mickey Mouse and Minnie Mouse.