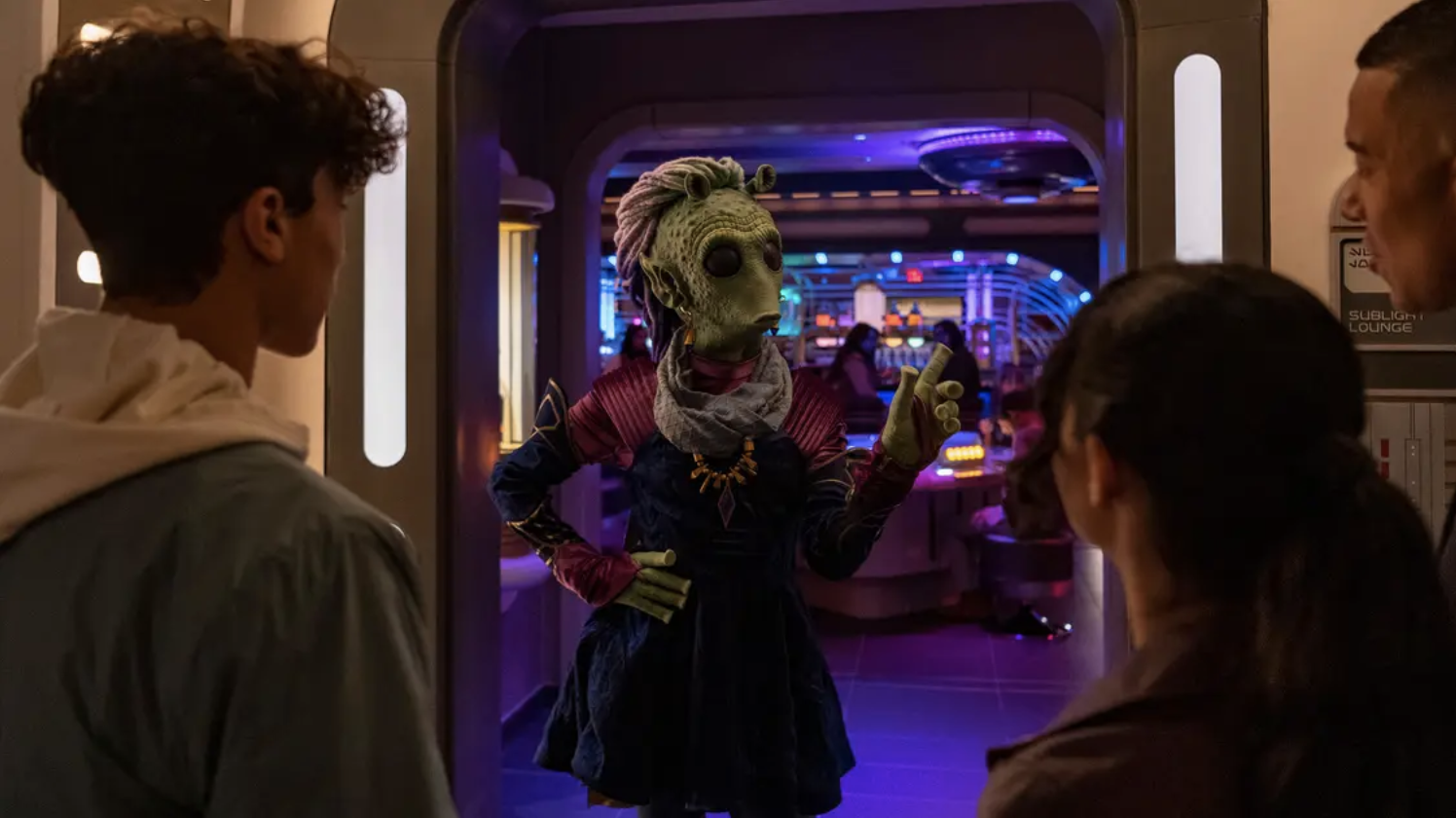 The story of Star Wars: Galactic Starcruiser is brought to life by a wide array of characters guests may meet during their two-night journey. These could be heroes of the Resistance, emissaries of the First Order, members of the ship’s exceptional crew, or others simply trying to make their own way in a galaxy far, far away.

By interacting with these characters, guests make new friends, learn useful information, discover secret parts of the ship, go on special missions and more. These moments build upon one another throughout the voyage, unlocking real-time dynamic storytelling in ways Disney has never done before – all driven by an eclectic cast of characters both familiar and new.

Charismatic, respected and trustworthy, Captain Keevan leads each voyage aboard the Halcyon starcruiser. The Pantoran is strong and decisive, and endears herself to both her crew and her passengers by being fair to all and cool under pressure – a skill she’s learned from her … “adventurous” history.

There is much fun to be had aboard the starcruiser, and Lenka Mok is guests’ go-to crew member to discover it all. As the captain’s right hand, Mok is in charge of onboard entertainment – it’s her job to make sure each voyage is memorable.

This astromech droid is Mok’s assistant cruise director, ensuring things run smoothly and on time. He keeps an eye on all the workings of the ship and is devoted to Mok and Captain Keevan. And while he loves to have fun with guests, he’s also good in a pinch if anything should go awry (one of his many hidden talents).

Sammie’s proficiency as the ship’s newly arrived mechanic is actually not his most endearing feature. His enthusiasm and good-natured personality quickly won over the starcruiser’s crew and makes him popular among guests who happen across his path. He’s clearly eager to prove himself on such a renowned vessel, and his tasks always seem to get done … somehow.

Singer, songwriter and all-around galactic superstar, Gaya is known for her powerful voice and distinctive music. The Twi’lek provides this voyage’s featured entertainment with an exclusive performance in the Crown of Corellia Dining Room … but may also have another reason for being onboard the starcruiser.

As Gaya’s manager, it’s Raithe’s job to ensure the superstar gets everything she wants – no matter what. If he has to bend some rules to make that happen, this smooth talker is willing to do what’s necessary. While he’s not a member of the ship’s crew, he may be found in some … restricted areas. He’s just making sure all of Gaya’s unwritten contracts are being honored, of course.

A talented Rodian musician, Ouannii provides accompaniment for Gaya’s performances in the Crown of Corellia Dining Room. While she speaks Huttese (the same language of infamous gangster Jabba the Hutt), Ouannii’s charm and affable personality help make instant connections with guests as she explores the ship and makes new relationships in her off hours.

Sandro is an aspiring musician and songwriter who is onboard the starcruiser to catch a glimpse of his favorite superstar, Gaya. Guests may catch the Togruta playing his stringed instrument in the Atrium, and they can even join him in a song. While Sandro’s primary goal is to get Gaya’s attention, he may discover a new goal on this journey.

D3-O9 is a talkative droid guests may see on vidscreens. Her primary responsibility is running ship logistics, so she knows everyone and everything happening onboard during a voyage. But her favorite part of the job is talking with passengers. Commissioned centuries ago by Chandrila Star Line’s founder, D3 has seen the ship’s history – and the entire galaxy – evolve, and she’s not shy about sharing her knowledge and opinions with passengers.

In “Rogue One: A Star Wars Story,” the Empire destroys the Jedi temple on Jedha, which was under the protection of a group known as the Guardians of the Whills. Though their survivors were scattered throughout the galaxy, the Guardians remained dedicated to preserving knowledge of the Force. Descendants of this group, known as the Saja, have found safe haven aboard the starcruiser and use one of its training pods to teach the ancient art of the lightsaber. Though not Jedi themselves, the Saja can sense the Force in others and teach them how to find their own connection to this mystical power. 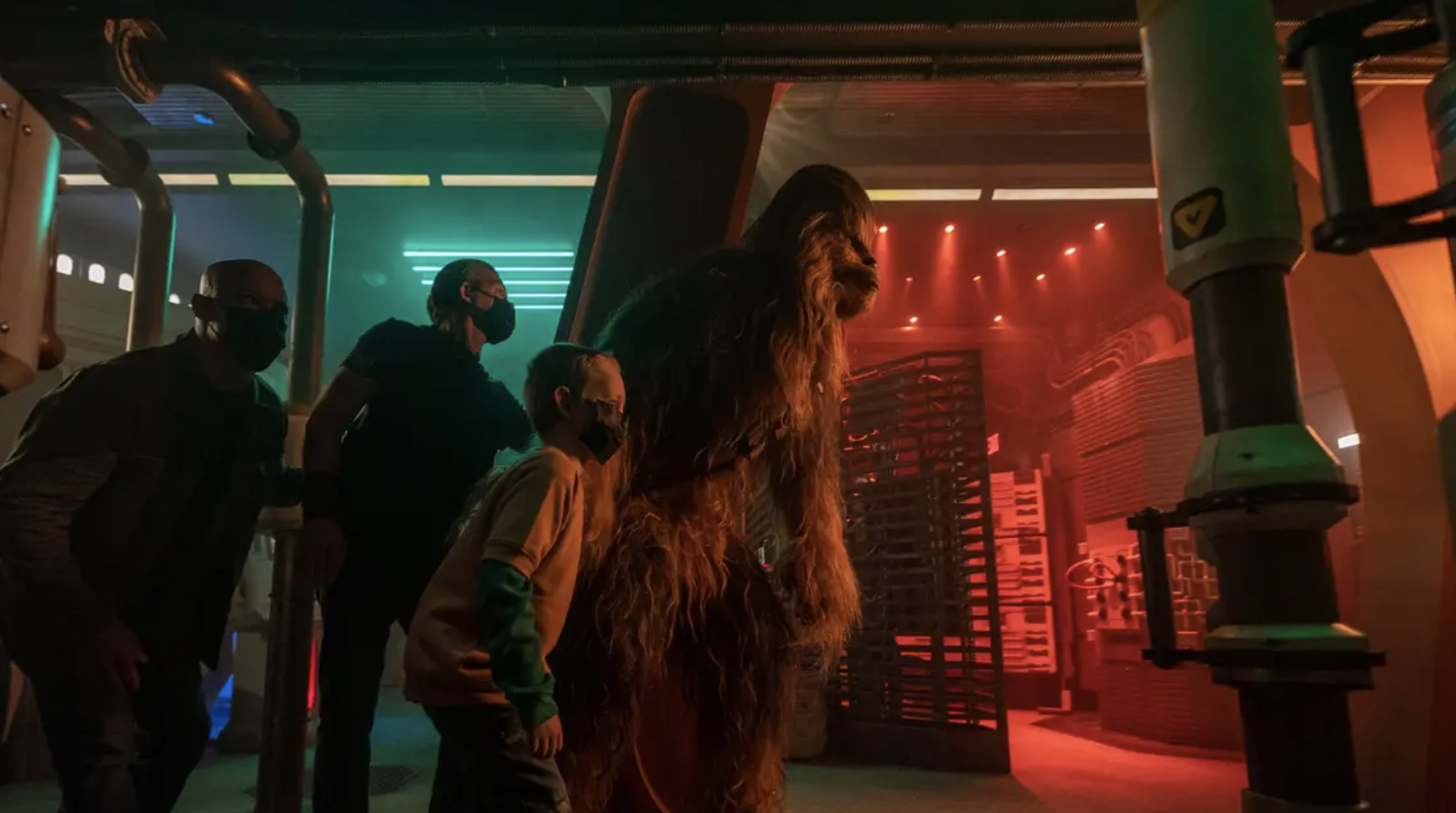 A legendary Wookiee warrior and Han Solo’s former co-pilot of the Millennium Falcon, Chewbacca (“Chewie,” for short) always seems to find himself in the heart of galactic conflict. He has friends aboard the starcruiser … and he always does whatever it takes to help friends in need.

A Force-wielding hero of the Resistance, Rey is recruiting people to her cause along the planets of the galaxy’s Outer Rim, including Batuu. Rey boards the starcruiser to help protect passengers from the First Order and secure information that will help the cause.

The Supreme Leader of the First Order strikes fear in the hearts of his foes with his imposing mask, long dark robe, iconic hilted red lightsaber and notoriously violent temper. As a highly trained, Force-wielding warrior, Kylo Ren is determined to root out the Resistance and is constantly searching for one of the movement’s most prominent figures – Rey.

The ambitious and intimidating Lt. Croy has taken a special interest in the starcruiser, having noticed how Resistance activity springs up at each of the ship’s ports of call. He is on special assignment to root out and expose any Resistance fighters who are rumored to be onboard the ship … and to raise his own standing within the Order in the process.

Col. Talis takes his duty and the mission of the First Order very seriously. Answering directly to General Hux, he is intent on ridding the galaxy of Resistance fighters – and anyone who supports them. Talis demands his subordinates perform their duties with the type of disciplined and ruthless efficiency the Order is known for … and that Supreme Leader Kylo Ren expects.

The First Order’s infantry are instantly recognizable in their stark white armor. Under the command of Lt. Croy, they are onboard the starcruiser to investigate reports of Resistance operatives among the crew and passengers.