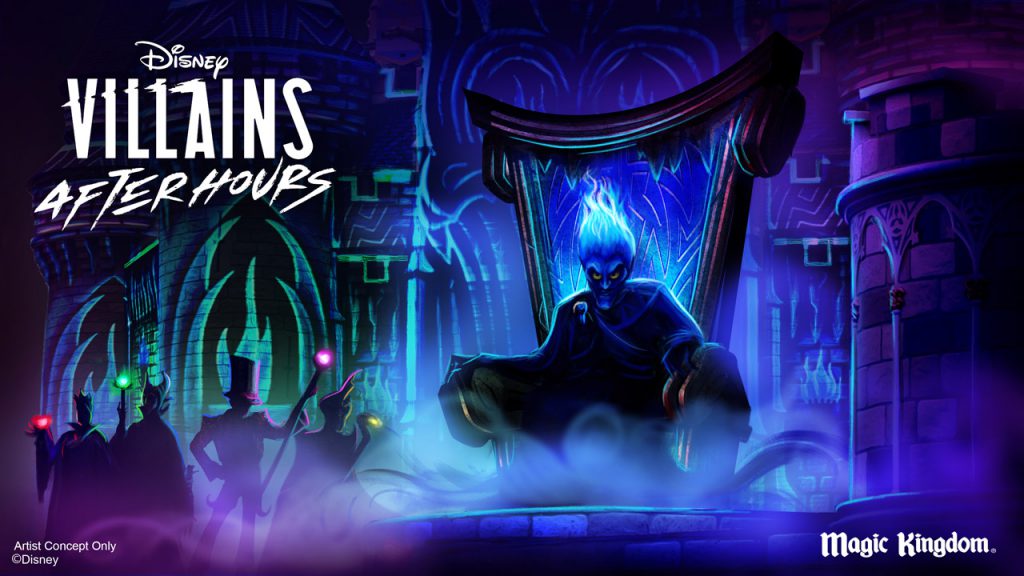 Who says Villains can only come out at Halloween? Get ready for Disney Villains After Hours! Tickets are on sale for this wicked fun special event, offered on select nights this summer until Aug. 8, 2019.

A dark magic is taking over Magic Kingdom Park and inviting you to run amuck in the Villains’ scary world. The party DJ gets things lit, energizing the castle stage with sick beats and transforming the entire Central Plaza of the park into a killer club scene. As the party heats up, the DJ introduces the “Caretaker” for the evening, the Lord of the Dead, Hades, who arrives in a burst of blue flames for the all-new show, “Villains Unite the Night.”

With Meg by his side, Hades sits atop his dark throne awaiting the alignment of five planets, following a prophecy that states when the five come together he will be able to rule the universe. But this dastardly plan doesn’t go quite as expected, when an assemblage of Disney Villains interrupts his party. Jafar, The Queen, Dr. Facilier and Maleficent arrive with henchmen in tow, prepared to showcase their power with spine-tingling displays of skill. It seems these Villains have also heard the prophecy and believe they are the ones who will rule all.

“I think Guests will really be impressed with ‘Villains Unite the Night!’” said Kate Pappas, managing producer with Disney Parks Live Entertainment. “This show is going to be more than 20 minutes long and run three times each night of the event, so everyone will have a chance to see all these great Villains on stage. Add in our amazing DJ, and the hub of the park will be pulsing with energy all night long!”

During the evening’s revelry, the Maleficent Dragon, with her Steampunk style and signature wicked grin, is freed from the “Festival of Fantasy” parade and let loose at night for the first time, breathing fire as she creeps through the park with her minions to join the party at the Central Plaza.

Beyond the castle forecourt, ominous lighting and music abound. In Tomorrowland, the Villains invade Space Mountain, taking daring voyagers on a villainous trip they won’t soon forget, with a new music underscore and the vilest Villains taunting you as you whiz by. And over in Adventureland, a live crew of scurvy scalawags invades Pirates of the Caribbean in search of treasure.

Disney Villains After Hours also includes wickedly good food and beverage selections, special event merchandise and low wait times at more than 20 attractions and experiences across the park. It all adds up to a party like no other.