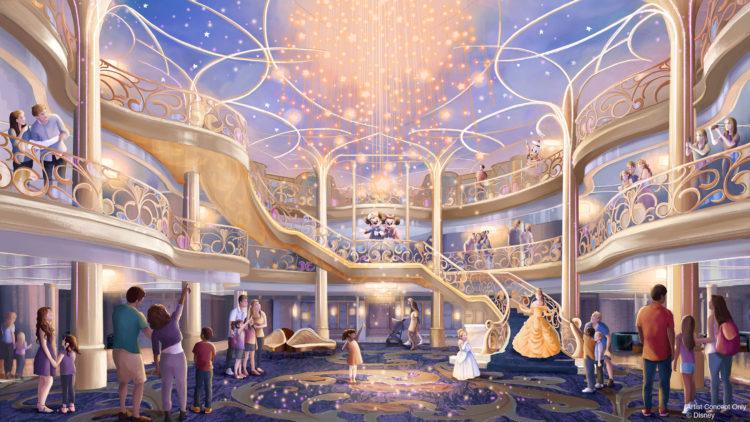 The three-story atrium of the Disney Wish will be a bright, airy and elegant space inspired by the beauty of an enchanted fairytale. It will serve as the gateway to an unparalleled vacation filled with experiences designed especially for families. (Disney)

At the D23 Expo, Disney Parks, Experiences and Products Chairman Bob Chapek revealed the highly anticipated name of the fifth Disney Cruise Line ship, as well as a first look at the ship’s elegant, three-story atrium and the iconic Disney character that will adorn the ship’s stern. Chapek and Imagineer Joe Rohde also shared new details about plans for a second island destination for Disney Cruise Line in The Bahamas.

With a little help from Tinker Bell, Disney fans were the first to hear that Disney Wish will be the name of the fifth Disney Cruise Line ship. The Disney Wish is scheduled for delivery in late 2021 and is expected to set sail beginning in January 2022.

“There couldn’t be a better name for our incredible new ship because making wishes come true is part of the Disney DNA and is at the heart of so many of our cherished stories,” Chapek said. 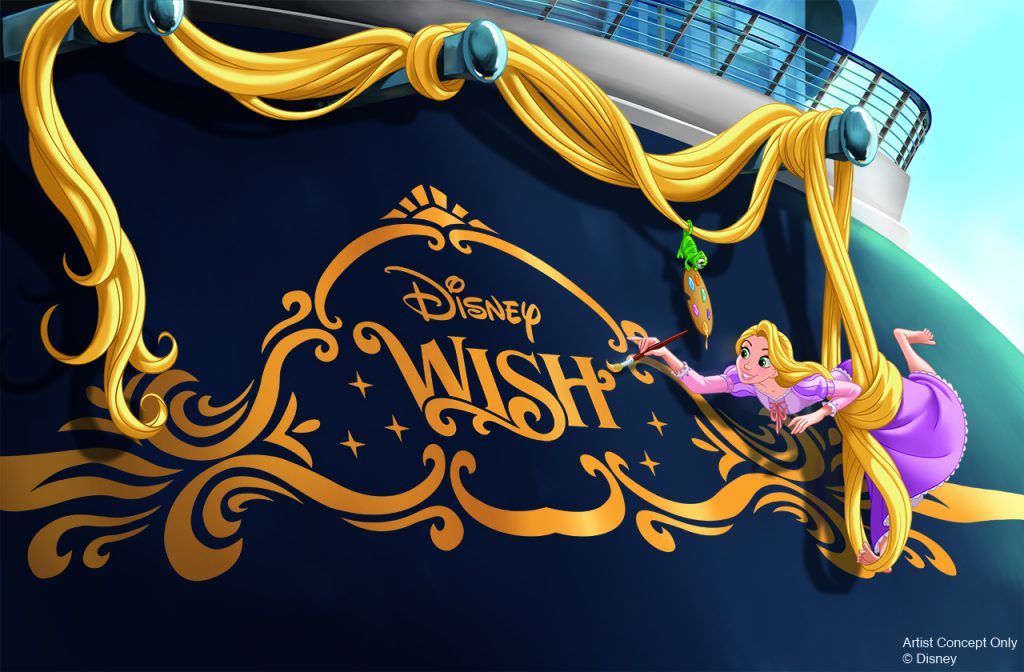 Stern characters – a beloved hallmark of Disney Cruise Line vessels – have been a tradition of the Disney fleet since the beginning and reflect the theme of each ship. For the Disney Wish, the ship’s stern will feature Rapunzel. Spirited, smart, curious and above all, adventurous, Rapunzel embodies the wish and desire to see and experience the world.

“Each Disney Cruise Line ship is unique, with a name that embodies the excitement of sailing with Disney and the power of our stories. The new ships will have the experiences our guests love, as well as all-new magic,” Chapek added.

The three new ships will be powered by liquefied natural gas and, at approximately 144,000 gross tons and 1,250 guest staterooms, will be slightly larger than the Disney Dream and Disney Fantasy.

Disney Cruise Line guests can look forward to a signature island experience that celebrates nature and the spirit and culture of The Bahamas at a new Disney port of call, which will be located on the breathtaking island of Eleuthera at a place called Lighthouse Point. (Disney)

Also at the D23 Expo today, Disney revealed new information and two early conceptual artist renderings for its second island destination in The Bahamas, which is located on the breathtaking island of Eleuthera at a place called Lighthouse Point.

“With three new ships joining our fleet, we thought this would be an incredible opportunity to add another unique destination to our ports of call. We looked all over The Bahamas and Caribbean for an ideal location that would enable us to create new experiences, while celebrating the culture of this amazing region,” Chapek said.

Disney Imagineer Joe Rohde, whose work includes the design of Disney’s Animal Kingdom theme park in Orlando and Aulani, A Disney Resort & Spa in Hawaii, has embarked on an in-depth cultural tour of the Bahamas to meet with local artists and cultural experts. Together, they have explored arts and cultural sites across New Providence and Eleuthera, from Junkanoo shacks to noted art galleries. 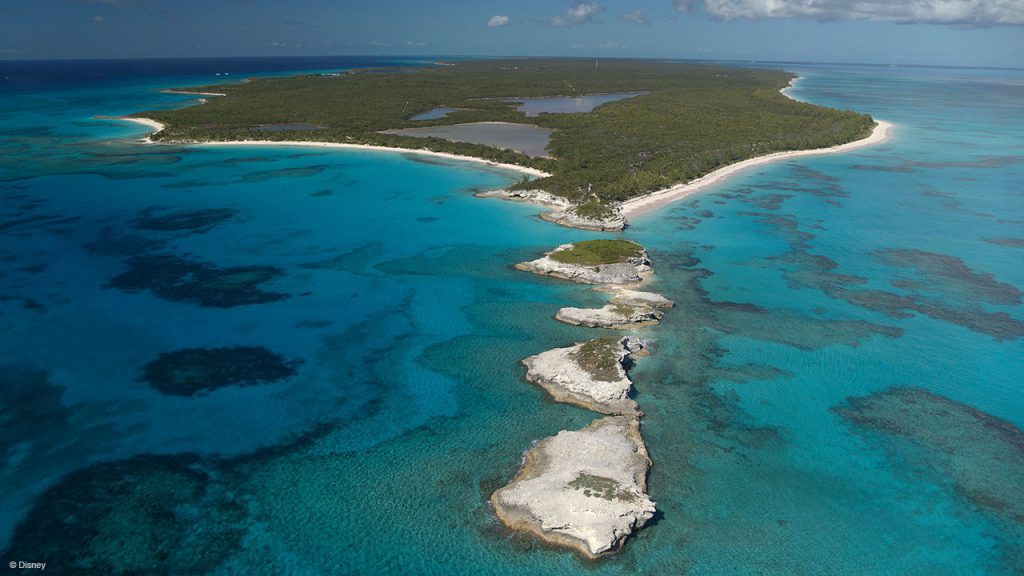 “The Lighthouse Point site is so beautiful and so full of nature that we want to preserve this and use our designs to call attention to the extraordinary quality of the place itself – a place of natural beauty with a rich and fascinating cultural tradition,” Rohde said. “We will be directly involved in conservation efforts to preserve and protect the environment that creates this beauty, and we will be working with artists of every kind, much like we did with Aulani in Hawaii, to create a unique destination that is rooted in Bahamian culture and imbued with Disney magic.”

Disney Cruise Line completed its purchase of privately owned Lighthouse Point earlier this year and signed an agreement with the Government of The Bahamas that guides the responsible and sustainable way the site will be developed.

Disney has committed to develop less than 20 percent of the property; employ sustainable building practices, including an open-trestle pier that eliminates the need to dredge a ship channel; establish environmental monitoring programs during construction and operation; and donate more than 190 acres of privately owned land to the Government, among other commitments.

Through the Disney Conservation Fund, Disney has provided more than $13 million to marine conservation programs around the globe, including several in The Bahamas. Since 2007, Disney has been directly involved in leading a multiyear initiative to protect and rehabilitate coral reefs in The Bahamas and will continue to work with leading conservation organizations and communities to protect special places there.

Construction at Lighthouse Point will begin only after an Environmental Impact Assessment and Environmental Management Plan are reviewed and accepted by the Government of The Bahamas and public consultation has occurred. Construction could begin in 2020 with completion in late 2022 or 2023.

Want to sail on the Disney Wish? Get on our wait list today! Contact Small World Vacations at guestrelations@smallworldvacations.com with your 2022 Disney Cruise wishes.