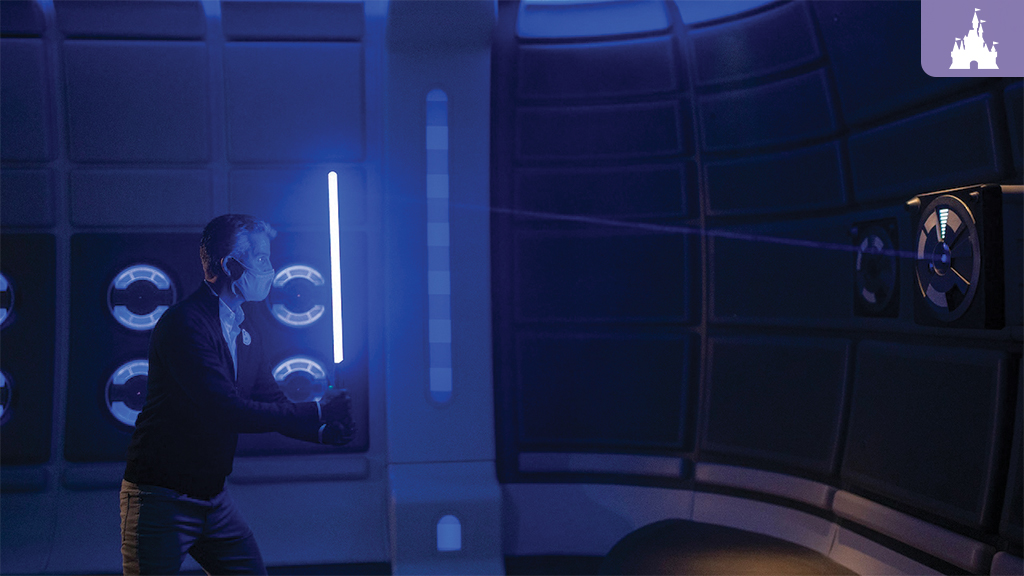 When this first-of-its-kind vacation experience begins welcoming Guests aboard the Halcyon starcruiser on March 1, 2022, they’ll finally know what it’s like to feel the Force and wield a lightsaber as they square off against a training remote, similar to Luke Skywalker in Star Wars: A New Hope. It’s one of the many immersive activities that comprise this two-night adventure where Guests will see, feel and live Star Wars.

This morning at Destination D23, Disney Parks, Experiences and Products Chairman Josh D’Amaro gave a sneak peek at this much-anticipated moment aboard the starcruiser. Let’s take our first step into a larger world and watch as Josh tests his skills with a lightsaber.

Josh also stopped by the starcruiser’s bridge, where Disney Imagineer Sara Thacher taught him how to defend the ship using some trusty blaster cannons. Guests will learn these skills, too, during their adventure … which may come in handy should anything unexpected happen. Because everything always goes according to plan in that galaxy far, far away, right?

This is just a taste of what’s to come for Star Wars: Galactic Starcruiser, so stay tuned as we hurtle toward March 1 like we’re jumping to lightspeed. Earlier this week, for instance, we revealed a few of the new characters Guests may meet onboard.

So until next time, just remember … the Force will be with you, always.