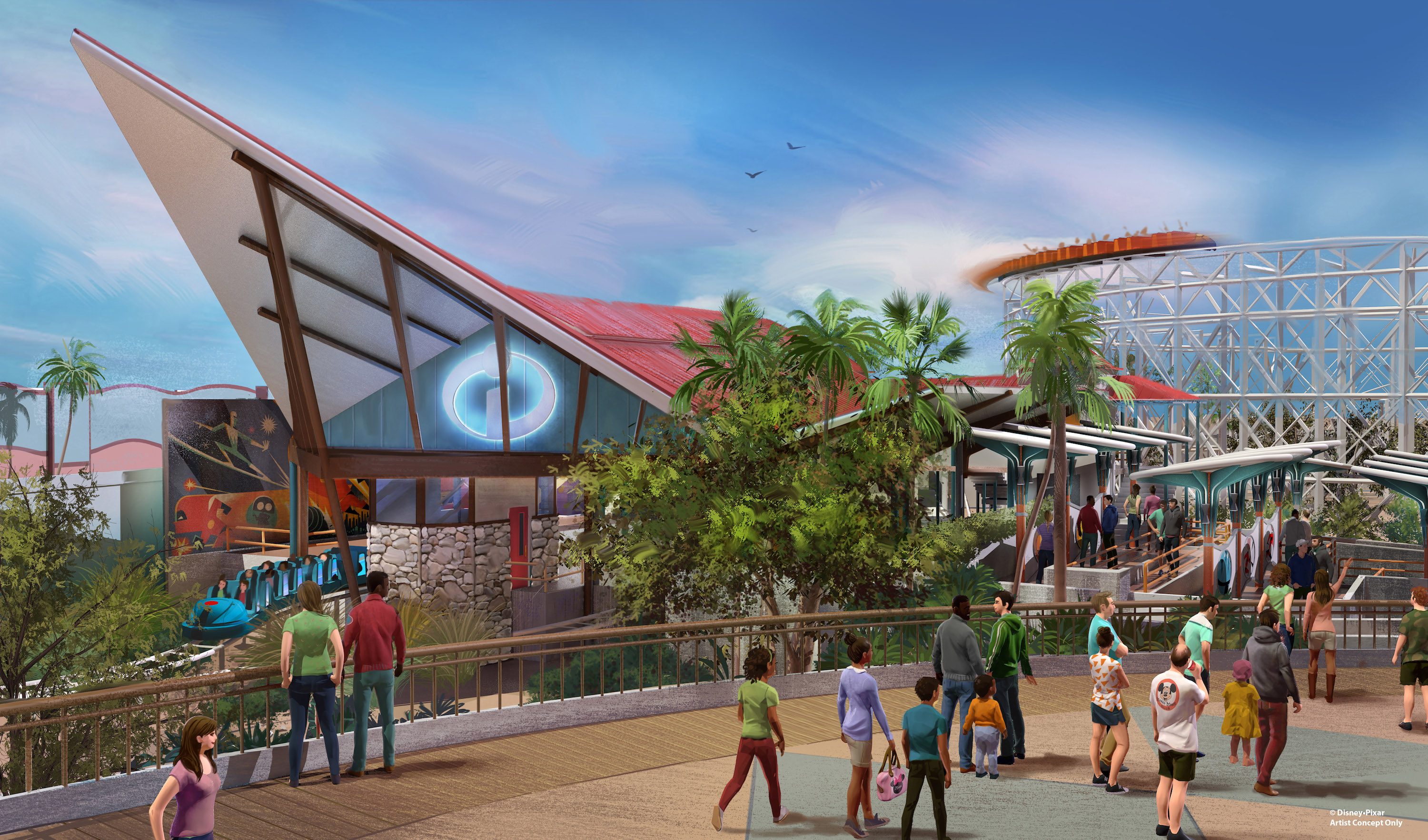 As we’ve previously mentioned, when Pixar Pier opens this summer in Disney California Adventure® Park, you will find four whimsical neighborhoods inspired by beloved Pixar stories. Here’s a bit more detail on what to expect!

Incredibles Park – Inspired by “The Incredibles,” Incredibles Park will be an inviting plaza featuring mid-century modern design aesthetics. You will enter through an archway where the iconic Incredibles logo will be seen overhead. Once inside, the new Incredicoaster will take you on a thrilling race alongside the Parr family. A combination of character figures, lighting, music and special effects will bring all the action to life! Upon exiting the attraction, the Jack-Jack Cookie Num Nums stand will tempt you with freshly-baked treats.

Toy Story Boardwalk – Adjacent to Incredibles Park, Toy Story Boardwalk will be themed to “Toy Story.” You will be shrunk down to the size of a toy on the fan-favorite Toy Story Midway Mania! Jessie the yodeling cowgirl will invite you for a rootin’ tootin’ spin on Jessie’s Critter Carousel(opening in 2019). At Poultry Palace, big appetites and small fries alike can enjoy a fun meal inspired by Pixar’s short, “Toy Story Toon: Small Fry.” There will even be a fun-sized Zurg—perfect for photo ops! You can also stop by Señor Buzz Churros, where Buzz has switched into Spanish mode to offer this classic treat. ¡Delicioso!

Pixar Promenade – This charming seaside promenade inspired by classic turn-of-the-century California boardwalks will celebrate the heartwarming stories and beloved characters from all of Pixar’s films. The focal point of Pixar Promenade will be the Pixar Pal-A-Round. This reimagining of a Guest favorite will still include the iconic face of Mickey Mouse on the Paradise Bay side of the wheel. But now, each of the 24 gondolas will feature different pairs of Pixar pals!

Pixar Promenade will also feature the Games of the Boardwalk, offering you a chance to test their skills and win a prize. The four colorful game booths will include Heimlich’s Candy Corn Toss, Wall-E Space Race, La Luna Star Catcher and Bullseye Stallion Stampede. Also featured along the promenade will be a classic band-shell stage, ideal for musical entertainment acts and encounters with favorite Pixar characters. Bing Bong’s Sweet Stuff will feature delightful confections, including saltwater taffy and rainbow cotton candy. For some savory bites, head over to Angry Dogs, where the dogs heat up as Anger from “Inside Out” burns with rage!

Get a closer look at Pixar Pier in this video!