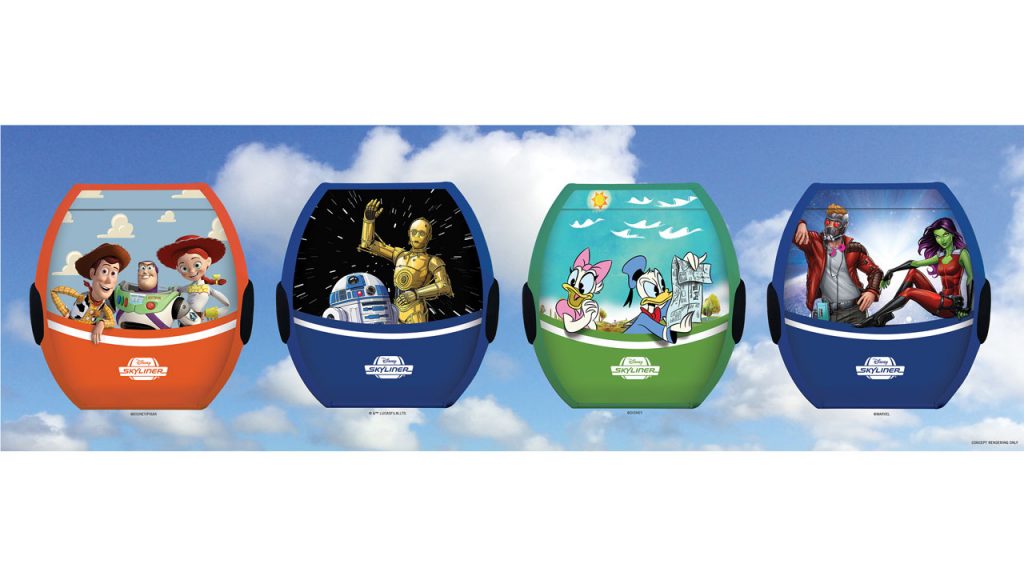 Sharp-eyed visitors to Walt Disney World® Resort this week may have spotted something new up in the sky while Disney Skyliner began its initial testing.

The Skyliner’s towers have been under construction for about a year, so to have a gondola up on its cables is an exciting milestone! Check out this video to hear more about the project from Jordan Matthews at Walt Disney Imagineering:

Several gondolas will be adorned with graphics based on Disney films, attractions and characters. So for example, Guests may jump into a gondola where from the ground it will look like Mickey Mouse, Minnie Mouse, Pluto or Chip & Dale are riding along with them Several Disney animated films will be represented, including “Beauty & the Beast,” “Frozen,” “Lilo & Stitch,” “Moana,” “Peter Pan,” “The Princess and the Frog,” “Ralph Breaks the Internet,” “Snow White and the Seven Dwarfs” and “Zootopia.”

You can get sneak peek at what a few of these special gondolas will look like in the photo above.

The other themed gondolas that will be part of the system include:

These gorgeous gondolas will be gliding across Walt Disney World Resort before we know it. Stay tuned as we reveal more exciting details about Disney Skyliner throughout the year!