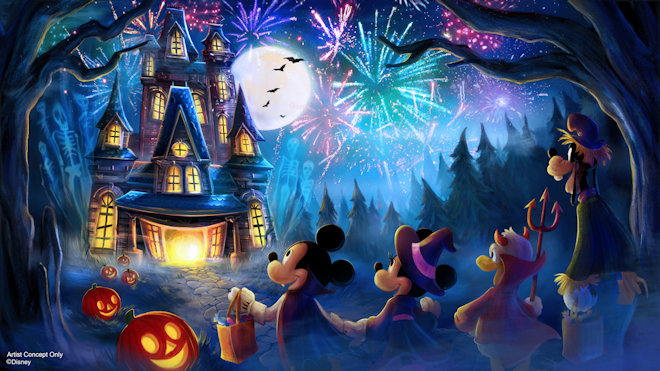 The spooky fun event, that happens on select nights from Aug. 16- Nov. 1,  2019, will feature returning favorites along with all-new experiences, including the debut of an incredible new fireworks spectacular.  As you can see above in the very first scene to be released, this new show will feature state-of-the-art projection effects, lasers, lighting and dazzling fireworks that come together to tell a not-so-scary story about how anything can happen on Halloween night. The show will take guests along on a trick-or-treating adventure, where four friends – Mickey, Minnie, Donald and Goofy – find themselves drawn into a mysterious haunted house. The journey takes them from one room of the house to another, encountering dancing skeletons, waltzing ghosts and a whole series of trouble making Disney villains.

If you are looking for an extra special way to celebrate the brand new show in its first year, our fireworks dessert parties are the perfect option! You can savor frightfully delightful treats – including chocolate-dipped strawberries, cupcakes, ice cream, seasonal fruits, cheeses, sparkling cider, signature lemonades and other ghoulish goodies – and take advantage of dedicated, dazzling views of the new Halloween fireworks spectacular.

Other returning favorites include:

·     “Mickey’s Boo-to-You Halloween Parade,” which happens twice nightly and features favorite Disney characters dressed in their Halloween best, along with the Disney villains and a cavalcade of fiendishly fun floats.

·     Storybook Circus Disney Junior Jam in Fantasyland is the spot for all of the young partygoers to get their groove on with favorite Disney Junior characters like Doc McStuffins and Vampirina.

·     Trick-or-treating throughout the park!

And last but not least, the parties will feature attraction enhancements just for the Halloween party!