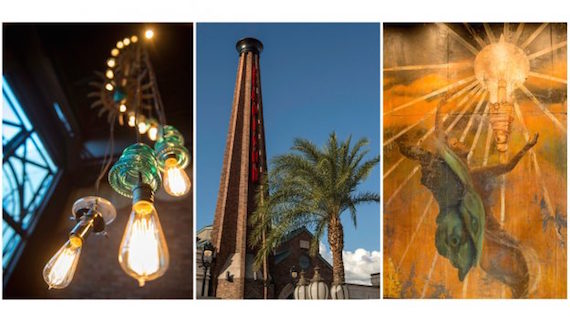 The Edison will be a landmark restaurant, bar and lounge that’s sure to become the go-to hotspot for Central Florida nightlife. The building, which originally served as the power plant for the growing town of Disney Springs, showcases remnants from its past life: You should keep an eye out for the Boiler Bar, with its dizzying electrical display panels, and the adjacent boilers, which are still classic centerpieces of any power plant. The décor is incredible, including a one-of-a-kind mural romanticizing the golden age of innovation and a larger-than-life, working clock tower that greets you upon arrival.

By day, The Edison will welcome families with an amazing lunch menu. In the early evening, everyone is invited to dine, but as night sets in (around 10 p.m.), the location transforms to an adults-only scene for Guests ages 21 and up, with a groundbreaking beverage menu, delectable dining and entertainment unlike anything else at Disney Springs. (Rumor has it that gravity-defying aerialists may be part of the lineup!) Here, you’re invited to escape the everyday and experience the era of invention and imagination.

Adjacent to The Edison is a trifecta of Italian venues, located in what was once the Disney Springs Air Terminal, a majestic Art Deco structure that welcomed you from across the globe to a world of sun, beauty and legendary hospitality. As the story goes, the air terminal was popular into the early 1930s, but travelers diminished as the years brought on more modern flying alternatives and larger destinations. Upon its closure, the building was purchased by an Italian immigrant couple named Maria & Enzo; the duo had previously run the small bakery in the terminal’s lobby.

Inspired by their shared love of food and travel, they opened Pizza Ponte – a favorite of Disney Springs locals for a quick bite any time of the day or night – with Sicilian-style pizza by the slice, made-to-order sandwiches and handmade Italian pastries. The success of this venue allowed Maria and Enzo to fulfill their ultimate dream to restore and transform the long-forgotten terminal to its former glory, giving it new life as a grand restaurant showcasing the flavors of Southern Italy.

Named after its founders, Maria & Enzo’s features vaulted ceilings, a geographically correct mural depicting the destinations once serviced by the terminal…New York, Daytona Beach, New Orleans and Cuba among them…and an impressive globe chandelier. (Insider Tip: When you look closely and they can see that Disney-inspired locations are called out, including a marker that denotes Marceline, Missouri – the hometown of Walt Disney!) The main dining room pays homage to the original departure lounge while nearby, a more intimate dining room highlights its history as the first-class lounge with service standards that are second to none.

Steps away, the unexpected Enzo’s Hideaway offers a glimpse into another lounge – this one, a secret space that first served as a bootlegger’s hideout. A legendary speakeasy that was discovered by Enzo after he purchased the terminal, this network of tunnels was the center of the Springs’ social life during the “dry years” of prohibition. Look no further than the graffiti wall and you can begin to imagine the storied nightlife that took place here.

All four venues are expected to open within the next month and should be fully operational by early January 2018.