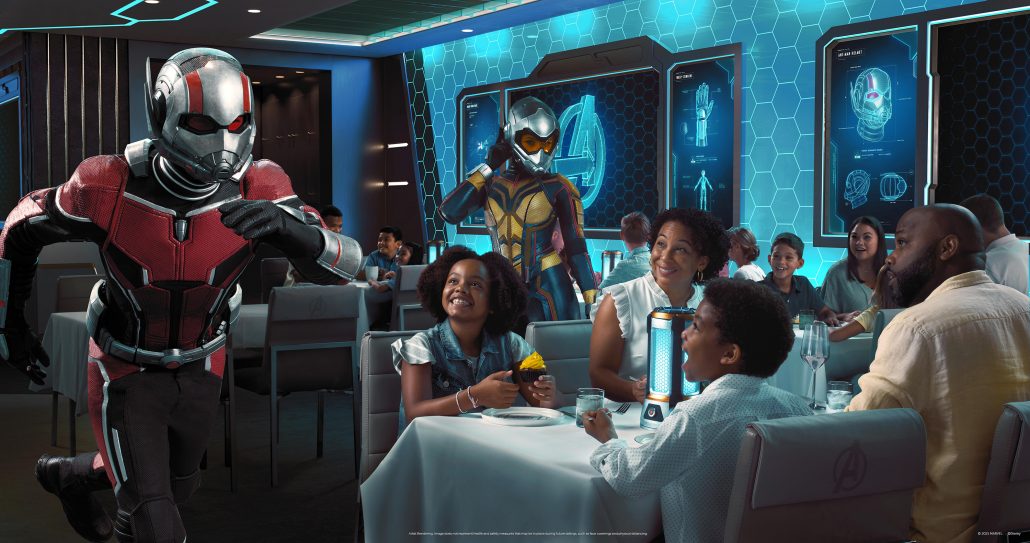 Disney Cruise Line is upping the “ant-e” on immersive family dining with the debut of “Avengers: Quantum Encounter” at Worlds of Marvel restaurant aboard the Disney Wish. Premiering in summer 2022, this all-new cinematic dining adventure will assemble some of Earth’s Mightiest — and tiniest — Super Heroes in a larger-than-life showcase of revolutionary quantum technology and world-class cuisine.

Guests aboard the Disney Wish will also enjoy Marceline Market and Mickey and Friends Festival of Foods, two new quick-and-casual dining options for relaxed meals throughout the day. 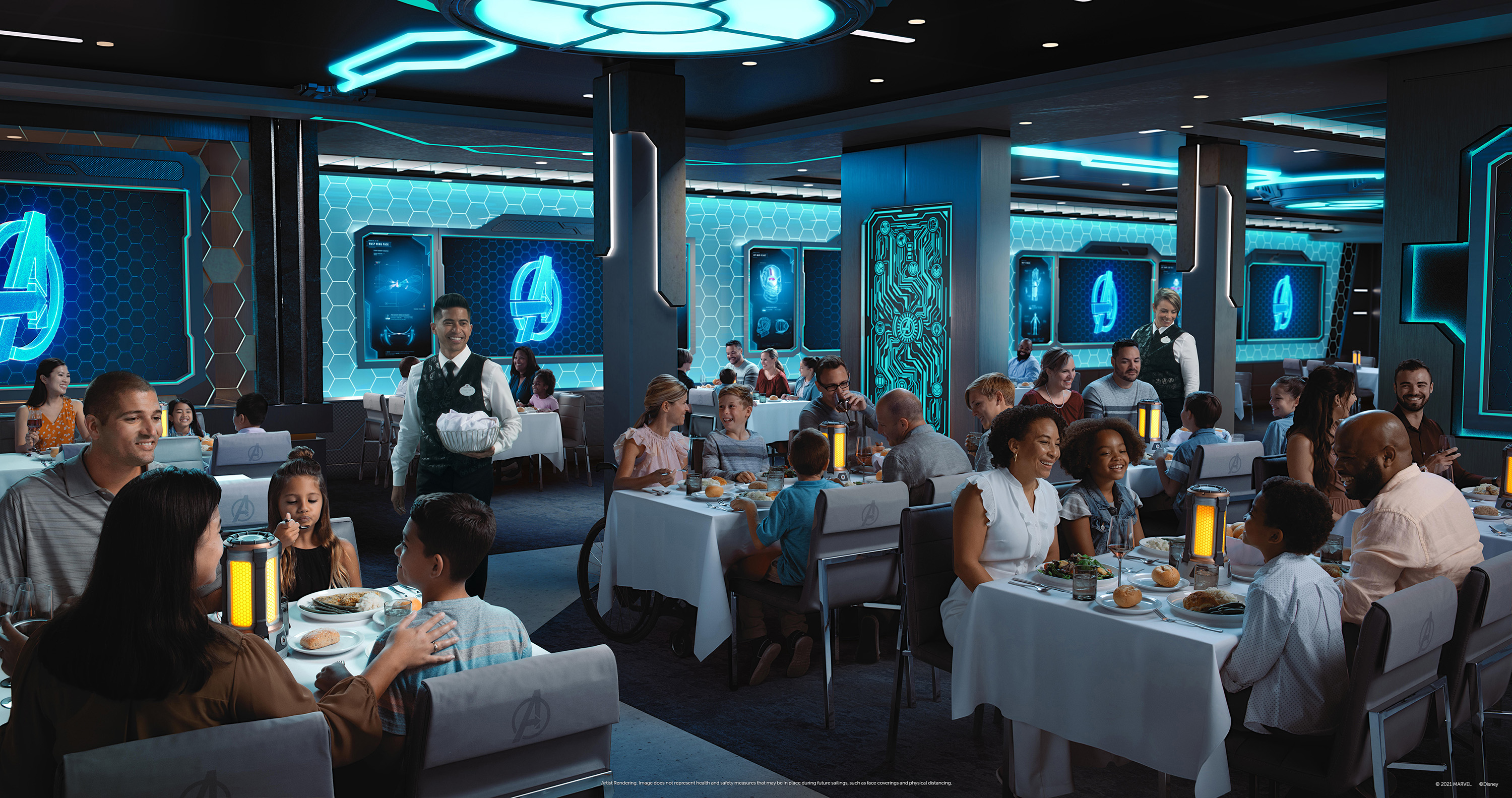 Worlds of Marvel is the first-ever Marvel cinematic dining adventure, where Guests will play an interactive role in an action-packed Avengers mission that unfolds around them, complete with a worldly menu inspired by the Marvel Cinematic Universe.

“Avengers: Quantum Encounter” will follow Ant-Man and The Wasp as they embark on their first public speaking engagement on behalf of the Avengers. Anxious to impress, they are hosting a special presentation of the most powerful Super Hero technologies, such as Captain America’s shield, Iron Man’s arc reactor and Ant-Man’s Pym Particles, giving Guests an up-close look at holographic models, field reports and iconic scenes from Marvel movies displayed on the screens surrounding the room.

The highlight of this special event is a hands-on demonstration of the latest and greatest Pym Tech, the Quantum Core, which uses cutting-edge — and highly unstable — technology to shrink and grow targets at the push of a button. A few “misfires” result in hilarious Ant-Man-style hijinks, but the real trouble begins when an unexpected villain shows up with a fearsome army in tow, eager to get their hands on this powerful quantum technology. Ant-Man and The Wasp will need all the help they can get to save the day, calling on Captain America, Captain Marvel and the brave diners of the Disney Wish for back-up.

Every table at Worlds of Marvel will feature an interactive Quantum Core, “a brand-new device that can cause objects to shrink and grow remotely.” Guests will assist Ant-Man and The Wasp as they attempt some small-scale trials, perhaps shrinking oversized luggage for easy stateroom storage.

When enough of the Quantum Cores are activated at the same time, the entire venue will become supercharged as energy pulses through the power channels in the walls and ceiling. Outfitted with state-of-the-art Pym Tech and decked out in signature Stark-itecture style, the design of Worlds of Marvel will offer surprises in all shapes and sizes, from a distinctly Marvel hexagonal motif to the various “Easter eggs” and unknown details embedded in the show.

True to its name, Worlds of Marvel will take families on a flavorful tour of the real and fictional settings of the Marvel Cinematic Universe, with dishes inspired by legendary locales like African Wakanda, Eastern European Sokovia and the Avengers’ home base of New York City. Though menus are still in development, Guests can expect to find a diverse array of globally influenced items and playful nods to the worlds and characters they know and love from Marvel Studios films. 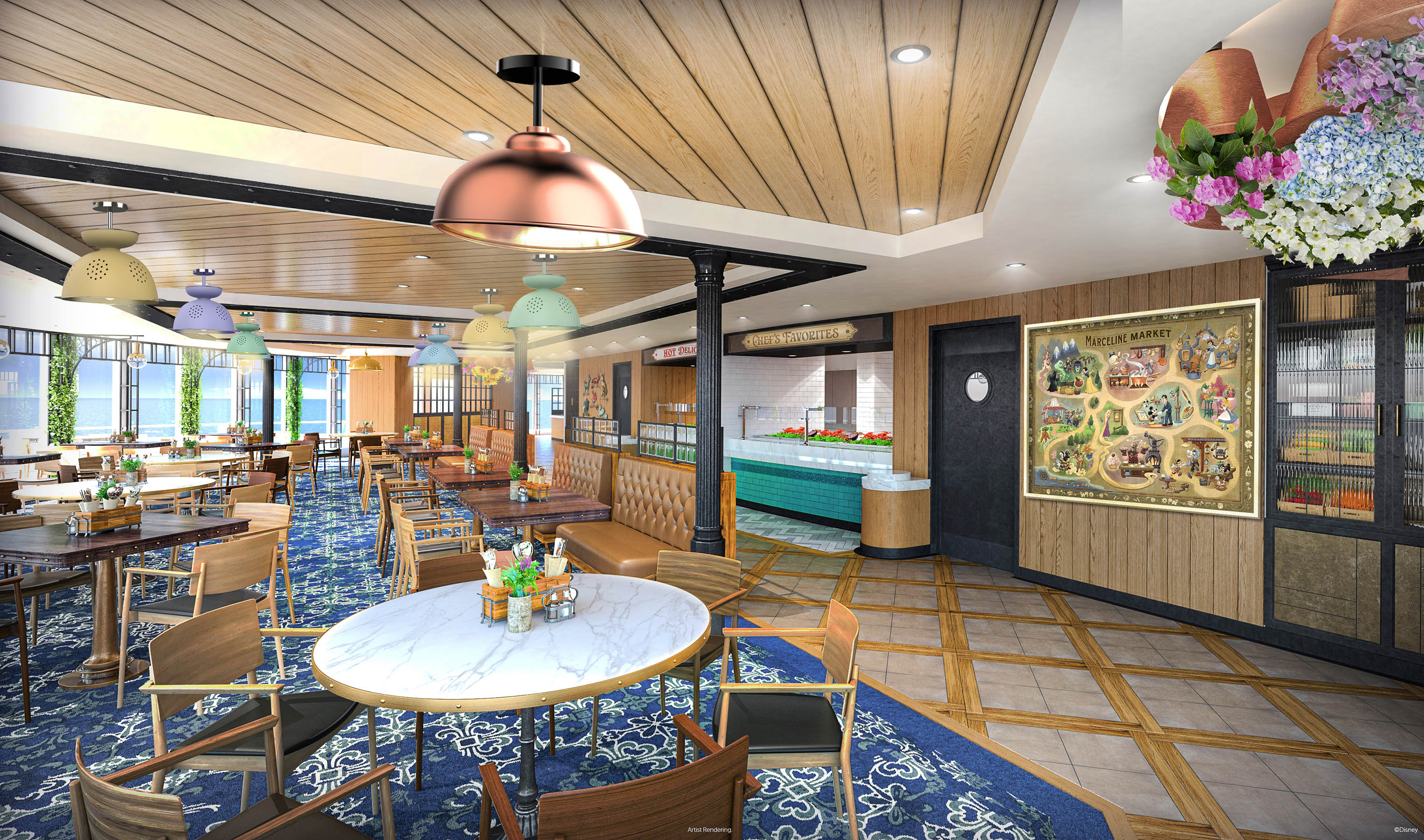 While the Disney Wish will offer upscale table-service experiences throughout the day, families will also be able to enjoy quick, convenient meals and snacks with more casual walk-up dining options than ever before.

Named for Walt Disney’s early childhood hometown in Missouri, Marceline Market is a stylish food hall inspired by popular marketplaces around the world. Here, Guests will find an ever-changing menu of specialized offerings in a vibrant, free flow setting with both indoor and outdoor seating and breathtaking ocean views all around.

Featuring 10 food stalls and a café-style beverage bar in the center, Marceline Market will be styled as an old industrial loft converted into a bustling marketplace, but with a distinctly Disney design twist: At this food hall, the local proprietors are Disney characters themselves, as each station is themed to beloved animated films such as “Tangled,” “Ratatouille,” “Alice in Wonderland,” “Zootopia” and more.

Marceline Market will offer a casual, walk-around dining experience for breakfast and lunch, followed by table-service dining at dinnertime with entrees cooked to order.

Mickey and Friends Festival of Foods

Located right in the middle of the fun on the upper decks, Mickey and Friends Festival of Foods will be the perfect place for families to grab a quick bite for lunch, dinner or anytime in between. Avid Disney cruisers will be particularly pleased by the mix of fan-favorite treats, like Disney Cruise Line’s signature soft-serve ice cream, with two brand-new selections: The Disney Wish will feature the fleet’s first dedicated quick-service venues for barbeque and Mexican-inspired fare.

The whimsical design is inspired by the seaside boardwalk setting featured in popular “Mickey Mouse” animated shorts, a fitting addition to the Mickey and Friends-themed family district on the upper decks. A sizable, shaded seating area will provide convenient and comfortable accommodations for families to relax and enjoy their meals.

These new restaurants join an exciting line-up of previously announced dining experiences for families and adults. In addition to Worlds of Marvel, families will embark on a culinary journey to the “Frozen” kingdom of Arendelle and the golden age of Hollywood at two new restaurants aboard the Disney Wish.

The Disney Wish will continue Disney Cruise Line’s innovative family dining concept, where Guests experience one of three imaginative restaurants each night accompanied by a dedicated service team that is assigned to their family throughout the voyage. With exceptional attention to detail, families will indulge in a variety of dining experiences with friendly, familiar, personalized service every evening.

Adult Guests ages 18 and older will savor gourmet meals and exceptional beverages at Palo Steakhouse, Enchanté by Chef Arnaud Lallement and The Rose, an upscale suite of epicurean excellence exclusively for adults, inspired by the elegant icons of Walt Disney Animation Studios’ “Beauty and the Beast.”

The Disney Wish will sail its maiden voyage on June 9, 2022, followed by a season of three- and four-night cruises to Nassau, Bahamas, and Disney’s private island, Castaway Cay, from Port Canaveral, Florida.