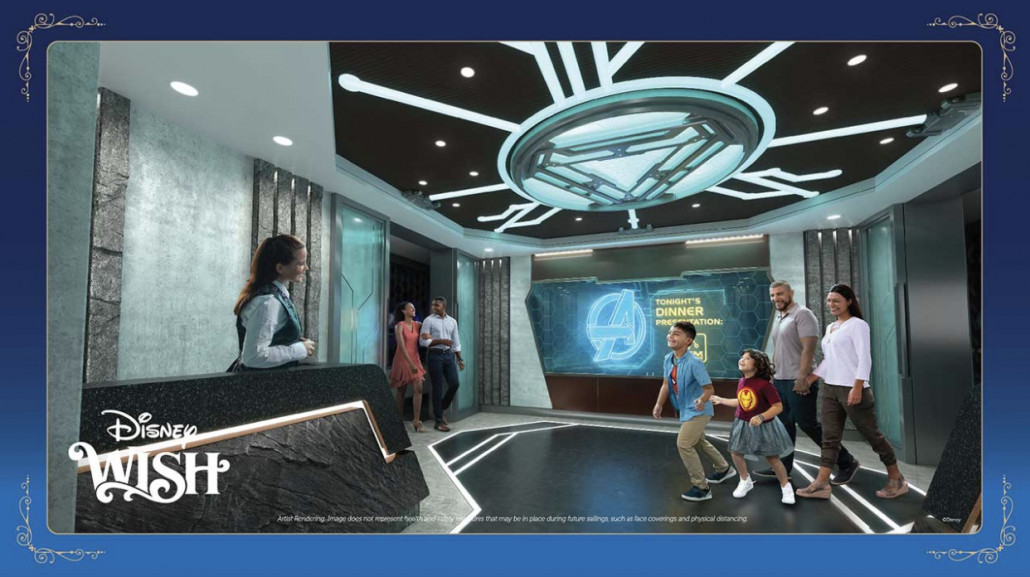 We’re super close to revealing new details about the first Marvel cinematic dining experience, Worlds of Marvel, coming to the Disney Wish next summer. And as we wait patiently (just like you!) to be able to talk more about this incredible new space, we wanted to share a round-up of all the ways Guests can live out their own Super Hero adventures on board a Disney ship.

This heroic day is returning to the high seas in early 2022 aboard the Disney Magic on select five-night cruises from Miami to the Bahamas and the Western Caribbean. Guests can join a brave training session with some of Marvel’s greatest, such as Spider-Man, Black Widow, Iron Man and Captain America, and enjoy an entire day filled with one-of-a-kind entertainment, a movie marathon, a costume celebration and more.

Marvel Super Hero Academy is one of the most popular play areas for kids ages 3 to 12 on Disney ships. On the Disney Magic and Disney Wonder, children can wield the weaponry of their favorite Avengers at the top-secret command post of S.H.I.E.L.D. On the Disney Fantasy, they can master the mystic arts with Doctor Strange. And on the Disney Wish, young “recruits” will train to be the next generation of Super Heroes with the help of their own real-life heroes, like Spider-Man, Black Panther, Ant-Man and the Wasp.

At the high-tech Avengers headquarters coming to the Disney Wish, kids will begin by choosing a Super Hero suit from a selection of power sets based on Marvel heroes like Iron Man and Captain Marvel, and watching their choices become nanotech forms around mannequins in real-time. Then it will be time for “Avengers: Mission Training,” a gesture-based technology game where they put their new suits and skills to the test as they virtually battle bad guys.

Worlds of Marvel is the first-ever Marvel cinematic dining adventure, where Guests will play an interactive role in an action-packed Avengers mission that unfolds around them. The experience will feature an original storyline starring fan-favorite Avengers and an infamous foe.

This upscale-restaurant-meets-technology-showcase will up the ante on the traditional “dinner and a show” concept. Outfitted with state-of-the-art Pym Tech and decked out in signature Stark-itecture style, the venue offers surprises in all shapes and sizes, from the tiniest design “Easter eggs” to the larger-than-life story that takes place.

True to its name, Worlds of Marvel will take families on a flavorful tour of the real and fictional settings of the Marvel Cinematic Universe, with dishes inspired by legendary locales like African Wakanda, Eastern European Sokovia and the Avengers’ home base of New York City.

Keep following along to learn more about how the action will unfold around Guests when the Disney Wish sets sail summer 2022.